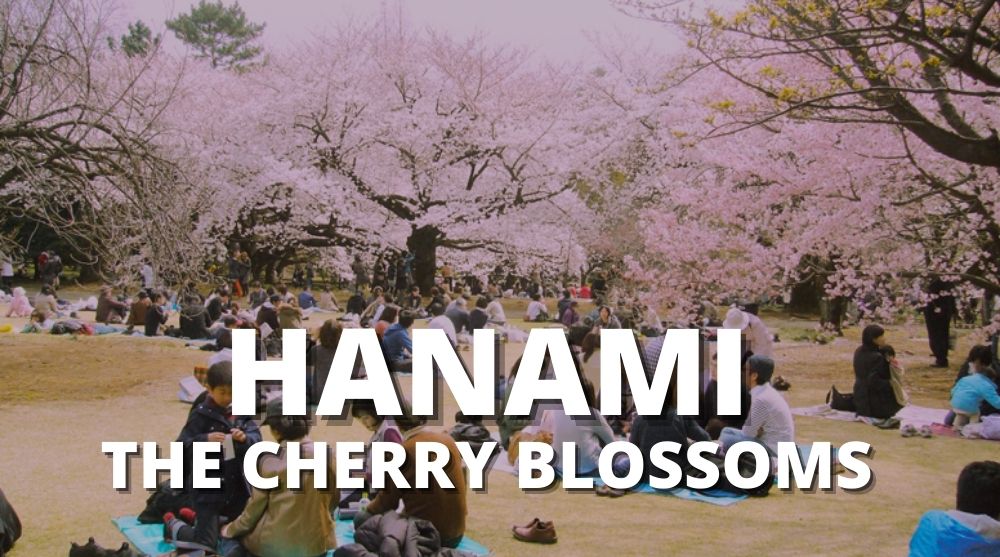 Hanami (花見, lit. “flower viewing”) is a traditional Japanese custom where people gather in family, in group of friends/coworkers or with their lover to watch the blooming of Sakura flowers (cherry flowers) during the Spring season between March to early May. Most of the time, Hanami commonly refers to the Sakura blossom, but there are also other types of flower blossom such as the plum (January), the wisteria (May) or the Chrysanthemum (November). Sakura Blossom is announced each year by the JPA (Japan Meteorological Agency) and only last a week or two.

Hanami is an ancient tradition that has been around for centuries. This custom seems to have started during the Nara Period (710-794) when people admired the plum bloom called “ume”, a new type of tree imported from China. However, since the Heian Era (794 – 1185), Sakura blossom started to become more and more popular, to a point it overcame plum blossom and became the definition of Hanami itself.

The first uses of the term Hanami to describe Sakura blossoms dates back to the Heian era from the novel “The Tale of Genji” by the noblewoman and lady-in-waiting Murasaki Shikibu where she describes the beauty of cherry blossom viewing as a “flower party”.

At that time, Sakura blossom used to be the universal sign of the arrival of the spring which would announce the beginning of the rice-planting season for farmers. But because Sakura blossom is very spontaneous and fast, this phenomenon was also believed to be a divine sign of kami (gods) inside the trees. Thus, Japanese people started to bring offerings and sake to the trees and praying the gods to offer a good harvest. This is where the whole ritual of having picnics under the blooming cherry tree originates from.

Emperor Saga of the Heian era, for example, truly embraced this new custom and began holding flower viewing parties with sake and feasts beneath the flowering sakura trees at Kyoto’s Imperial Court. Poems would be written praising the fragile blooms, which were thought to be a metaphor for life itself, dazzling and beautiful yet transitory and ephemeral.

However, Hanami was first restricted to the Imperial Court’s elite until it quickly extended through Samurai culture and, by the Edo period, to the general population. Tokugawa Yoshimune (the eighth shōgun of the Tokugawa shogunate of Japan) encouraged this by planting cherry trees all over Japan so that any Japanese could celebrate the Hanami. This is from this period that Hanami became a cultural custom with Japanese people from any social class started eating and drinking in joyous feasts under the sakura blossoms.

Thus, Sakura trees quickly became a very strong symbol in Shinto religion to a point it became a sacred landmark symbolizing Shinto shrines, Buddhist temples and local areas. But most of all, the sakura flower symbolize the “time of renewal” and “optimism” as it is defined in the concept called Hanakotoba that explains the meaning of each flower in Japanese Culture.

Moreover, Books from the Edo period explains that various species of cherry trees were produced and planted all over the country on riverbanks, on Buddhist temples, in Shinto shrines and in daimyo gardens located in urban areas such as Edo, where the common people living in these urban areas could enjoy them as well.

Finally, as Japan became always more and more modern, Hanami true symbolism faded to become just an annually custom where people are more interested in the food and drinks accompanying a Hanami party than actually viewing the flowers themselves. The proverb dumplings rather than flowers (花より団子, hana yori dango) sums up this aspect pretty well.

Mono no aware (物の哀れ, lit. “the pathos of things”, and also translated as “an empathy toward things”, or “a sensitivity to ephemera”) is a Japanese proverb that invites people to focus on the awareness of impermanence (無常, mujō) and to appreciate things as much as possible before they are taken from us by time.

In regards to Hanami, the concept of Mono no Aware conveys the emotion or empathy we feel towards the ephemeral state of the cherry tree whose blossom only lasts 1 week per year. Thus, reminding us with beauty and symbolism of how short and fragile life can be and how we are all doomed to an ineluctable death at the end of our time on Earth.

Today, Hanami has become more like a commercial event than anything else. People from all over Japan still gather together to hold parties under the blossoming trees but are more interested by the concept of feast than watching the cherry blossom itself. These parties are called “Hanabi parties” and can last until late at night.

In more than half of Japan, cherry blossom days coincide with the beginning of school and work after vacation break, therefore Hanami is frequently used to launch welcome festivities. People usually rush to parks several hours or even days ahead of time to reserve the finest spots to celebrate Hanami with friends, family, and coworkers.

Nighttime parties beneath the sakura are also prevalent in places like Tokyo. At night, Hanami is known as yozakura (夜桜, lit. “night sakura”). To have yozakura, temporary paper lanterns are strung in several areas, like as Ueno Park. Each Hanami season, a group of YouTubers hosts a major Hanami celebration in Tokyo’s Yoyogi Park, gathering over 600 individuals and many international visitors. It is considered as Japan’s largest creator-organized event.

Best places to watch the Cherry Blossom in Japan

Sakura blossom happens from the south to the north. So, depending on your location in Japan, you will have to keep an eye on the appropriate period to be sure to not miss your local Hanami.

For that, it exists an “Cherry Blossom Forecast” that estimates the date when Cherry trees should bloom in every region of Japan. However, be sure to plan a few days in advance to avoid any bad surprise.

Shinjuku Gyoen (新宿御苑) is one of Tokyo’s largest and most popular parks with its 58-hectare. Located just a short walk from Shinjuku Station, this park is home to more than a thousand cherry trees of 10 different varieties.

Ueno Park (上野公園, Ueno Kōen) is a large public park located next to Ueno Station in central Tokyo. Originally part of Kaneiji Temple, one of the city’s largest and wealthiest temples and a family temple of the ruling Tokugawa clan during the Edo Period, Ueno Park is home to more than 1000 cherry trees which makes it one of the most popular and lively cherry blossom spots to watch the Hanami.