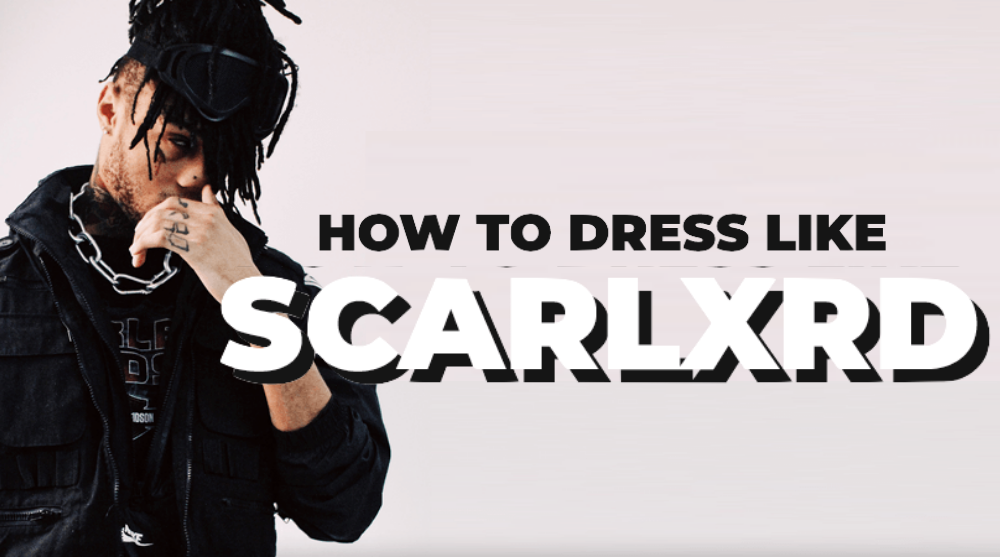 How to dress like Scarlxrd? Where to find the clothes from his music videos? Are Scarlxrd’s outfits easy to find on the internet?

If you’re here, it’s because you literally fell in love at first sight with scarlxrd’s outfits and you would like to dress exactly like him! Don’t worry: you’ve come to the right place.

Scarlxrd style is difficult to categorize when you first see it. However, his clothing style has a name: techwear. You can see it in his clips, it’s those pants from a post-apocalyptic action movie, his zipper mask, and his so beautiful military or tactical jackets.

Let’s go into a little more detail about this dark and mysterious style. 🔍

Tactical pants are the absolute basis of techwear style. They are easily recognizable by their visible straps, their multiple pockets, and their special cut: very tight at the ankles. Sometimes, you can also find chains on them, for the most gothic of them.

Scarlxrd likes to wear techwear pants, very often with a black tactical belt, chains reminiscent of the gothic style, and multiple pockets on the sides.

Among the pants, Scarlxrd wears are brands such as Jack & Jones or Asos. For example, in his clip “GXLD”, Scarlxrd wears black techwear pants that can be found here: ASOS Black Tactical Pants.

Tech wear pants are so important in the style because they are the link between shoes and the next garment: the techwear jacket.

The second most important element is of course the techwear jacket, consolidating his futuristic and urban look. Always in black or military color, which is the norm in techwear style, the jackets he wears are more expensive than his pants…

In CXLD BLXXDED, he wears a Black Windbreaker Jacket from Napapijri at around 470$. In the HEAD GXNE clip, he’s wearing a Supreme X Fox Moto Jersey jacket that’s being auctioned off today at over $450.

Techwear is very expensive when you pick up your clothes from very popular brands. In niche shops, you will find techwear and streetwear jackets at a much more affordable price, for similar quality.

Now that we’ve seen the two core products of the techwear look, let’s move on to the accessory that makes all the difference in Scarlxrd’s clips and makes his tops very aesthetic: the tactical jacket.

Tactical jackets, originally used by the military to store all kinds of weapons and war accessories, are now used in techwear fashion to give this unique look. Scarlxrd wears one in the HEAD GXNE clip: Rothco Tactical Recon Vest, which costs $55.

Tactical jackets come in many different styles, some are just aesthetic like the one described above, but sometimes Scarlxrd also wears lighter tactical jackets with a real military purpose, as in the BANDS clip where we see the British artist wearing a jacket that can be found in our shop.

It’s a truly iconic accessory for both his music videos and techwear culture. And do you know what better symbolizes the tech wear look? The masks.

The mask with zipper is the trademark of Scarlxrd’s media image. This element of the rapper’s outfit has made him such a special character with such pronounced imagery.

The zippered mask that can be found repeatedly on his Instagram account sells for around $35 at the following address: Scarlxrd Zipped Surgeon Mask

His most popular mask with Japanese inscriptions can be found on Scarlxrd’s official store for $20: Red Surgeon Mask.

Specific techwear shoes are the least popular among fans of the techwear look, although they are perfectly suited to the pants associated with this fashion. Instead, Dr. Martens or streetwear sneakers are used and hit the bull’s eye!

In the LIES YXU TELL clip, the artist wears a pair of white Nike Air Max 1, unfortunately out of stock: Nike Air Max 1 on Flightclub.com.

His shoes are generally very classic sneakers, you will not have any difficulty to find them in sneaker shops. Don’t hesitate to take a look at our collection of streetwear sneakers, our pairs are original and designed to go perfectly with cargo pants and techwear pants such as the ones Scarlxrd wears!

There you go, now you know how to dress like Scarlxrd. His style is called techwear, it is composed of military, dark, black, and almost gothic clothes, and we love it! However, it is important to know that this look requires specific clothes that you will not find in any store.

Feel free to share your best outfits/garments in the comments. We hope we have answered the question you were wondering: How to dress like Scarlxrd?

Now, to get that special techwear style, you’re gonna need the best clothes on the market. Good luck with your researches and don’t hesitate to look at our techwear and streetwear collections! Discover them by clicking on the image below: