Newcomers may have a wrong idea about manga and think that it is divided into two main groups: on one side, manga for boys with fights and on the other side, manga for girls with cute stories. It is not so! As you will see with Junji Itō, manga is also able to scare you and make you feel very uncomfortable. But wait, what is Junji Itō?

Junji Itō is a 57 years old Mangaka (manga writer) from Japan who is the master of what we call “Japanese Horror manga”. Junji Itō is also the author of the most popular horror manga published until 2021 like Uzumaki, Gyo and Tomie.

Let’s discover a bit more about who is this famous Junji Itō: #intro

Who is Junji Itō?

Junji Itō was born on July 31, 1963 in Gifu-ken, in the central part of Japan. His passion for drawing dates back to his childhood when he was frequently captivated by the drawings of his older sister. Growing up, he discovered the work of Kazuo Umezu, nicknamed the father of horror manga and read each volume of the author. At the same time, he immersed himself in literature and read with the same avidity the stories of H. P. Lovecraft.

With such inspirations, Junji Itō’s style seems to be obvious. However, the style that we are talking about did not come directly to him as his first career led him to become a dental technician in the mid-80s. At this time, he used his spare time to developed his drawings and imagined his first stories. 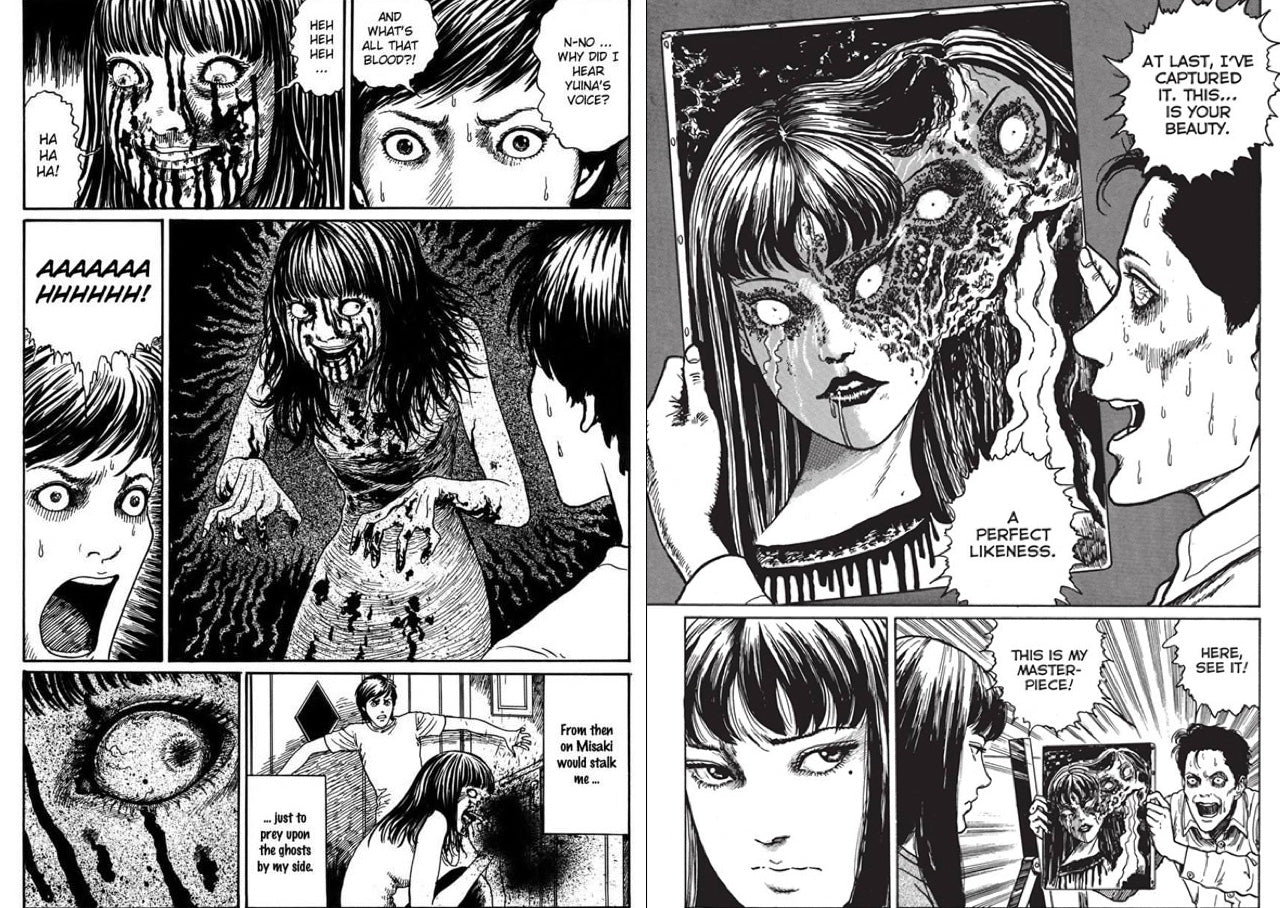 In 1987, he sent Tomie, one of his stories, to Gekkan Halloween, a horror manga magazine organizing a contest with the legendary Kazuo Umezu himself as judge. The story tells us the misadventures of Tomie, an immortal and not quite human girl whose beauty drives men crazy. He manages to have several sequels published to his story that push Ito to surpass himself.

Already with Tomie, we find the elements that will become his trademarks: charismatic female characters, the inevitability of death, the putrefaction of society and many disturbing images that will make you look away. Like Lovecraft’s stories, Ito’s characters are often the victims of something much larger and more mysterious than themselves. 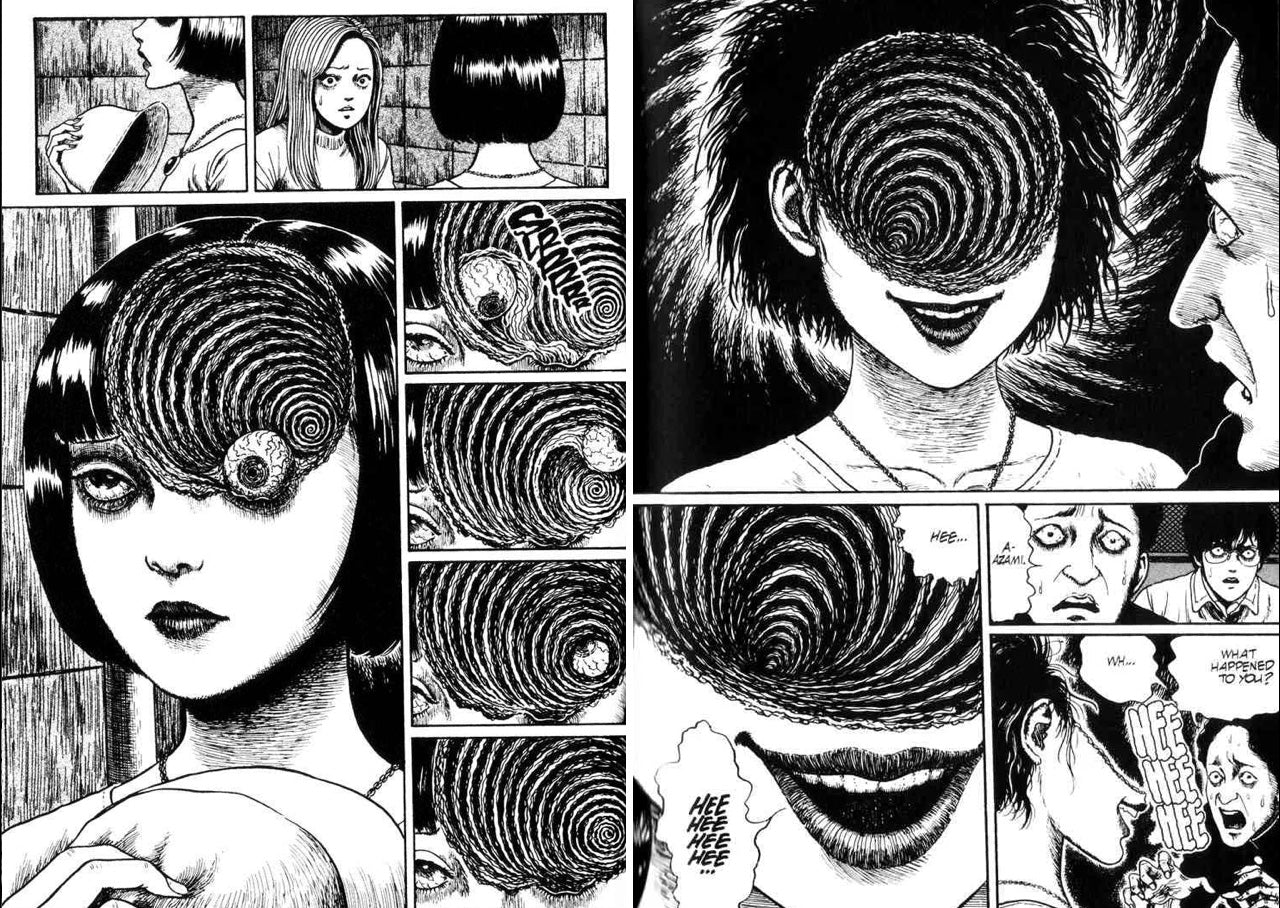 His first big success for which he is known all over the world is Uzumaki. A relatively short story since the weekly publication lasted only a little more than a year, the whole now compiled in three volumes. Uzumaki, which translates as “spiral”, takes us to a cursed fictional town where the inhabitants are haunted by supernatural forces involving spirals.

The omnipresent symbolism mixed with Ito’s horrific drawing results in pages that are each more striking than the last. People become obsessed with the shape of spirals. The heroine will experience this when her hair mysteriously starts to curl into perfect spirals.

It may not sound scary when you put it that way, but as you can see, the illustrations make it all horrifying. An eerie atmosphere then engulfs the city without the characters or the reader being able to pinpoint the origin and meaning of it all. The confusion only exacerbates the feeling of terror until the end of the manga.

Ito noticed before the creation of the manga that in our world the spiral is a positive symbol, especially in Japanese culture where it is often associated with the physical features of warm and funny manga characters. Naturally, he wanted to reverse this trend, thinking that if he drew spirals slightly differently, he could make them a horrific symbol.

Two years later, Junji Itō returns to the charge with Gyo. For this one, we put Lovecraft aside a little to be inspired by Steven Spielberg’s work in Jaws which, according to Ito, “perfectly captures the essence of fear, materialized by a man-eating shark”.

We meet Tadashi, a young man with a passion for diving, as well as his girlfriend, Kaori, who has the particularity of having a highly developed sense of smell. The adventure really begins during a diving session in Okinawa where the couple falls nose to nose with a strange fish with legs almost resembling those of a spider. Kaori is immediately disturbed by the foul smell of the creature, even if Tadashi takes the time to capture it in a bag. 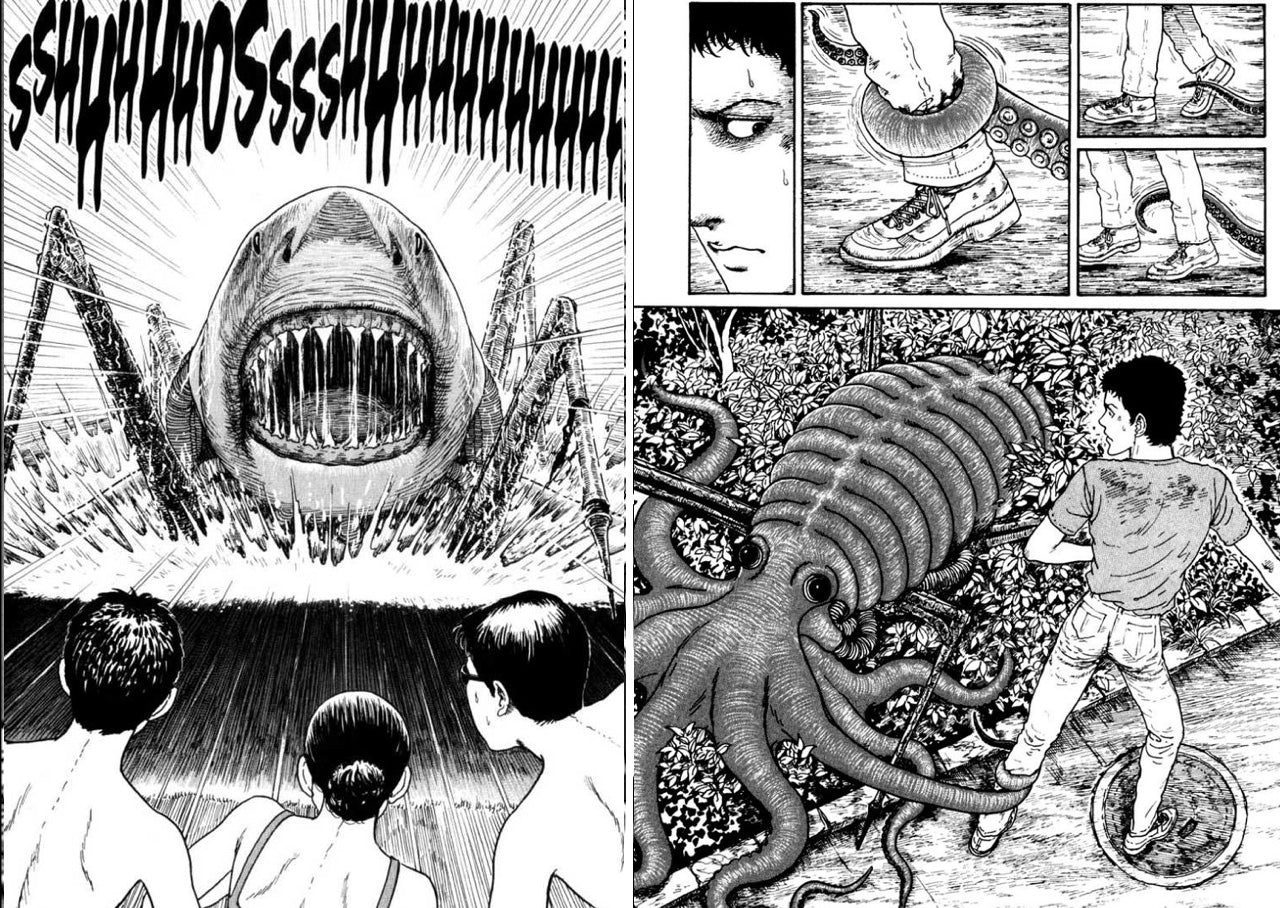 The next day, a horde of sea creatures with legs in the same kind invade the island while the couple leaves for Tokyo. Back home, Kaori is still uncomfortable because of the smell of the fish that stays with her and Tadashi decides to show the specimen to his uncle, Dr. Koyanagi. Dr. Koyanagi explains to him that these creatures are the result of the scientific research of the Japanese army during the Second World War.

The goal was to create a virus that would trigger in the host a repulsive smell of corpse and that could cause the death of those who smell it. Since the odor could spread in a few seconds in the air, the weapon could have changed the course of the war. Kaori develops this smell herself and will sink into depression and madness, to the point of wanting to commit suicide.

In both cases, the reader is in the presence of an artist passionate about fear and all that it implies, who likes to present it to us in new ways and through ideas that are as innovative as they are disturbing. What recurs throughout Junji Itō’s works is what is called “body horror”, that is to say, horrific elements of the body.

That is to say, horrific elements affecting the human body, metamorphosing it into forms that go against a pleasant aesthetic. Whether it is giant spirals instead of skulls or legs growing on animals that should not have them, these examples are only the tip of the iceberg that is Junji Itō’s work. 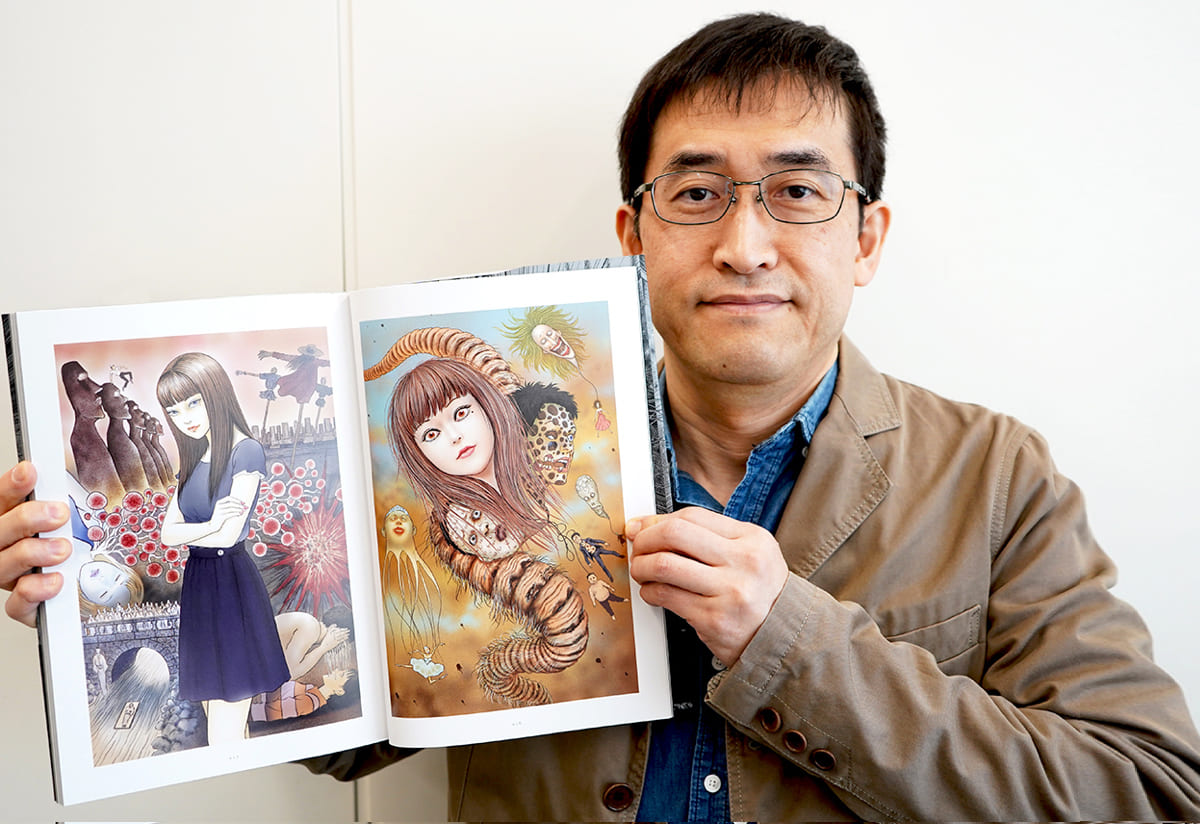 Since Gyo, the Mangaka has written and drawn many short stories, each one more brilliant than the other. Here is one of our articles where you can find the best Junji Itō stories ranked from the most popular to discover all the catalog that horror manga has to offer.

Completely changing his style, he also recently published Ito Junji No Neko Nikki, a manga where his usual style remains intact, but this time for comic purposes in a much lighter story. To the great surprise of many readers, he will also write a story around a Pokémon! Like what, even a master of horror sometimes needs to take a break from this particular genre.

With an impeccable technique and a very particular vision of horror, Junji Itō proposes stories as surprising as disturbing. A fear that does not necessarily play on the usual codes, but that makes you feel fears you have never felt before. A must-see artist for all horror lovers, manga fans or not!

And you dear readers, does this make you want to dive into horror manga? If you already have, you should know that we have created a complete Junji Itō clothing collection where you can find all the best apparel and accessories from his most famous stories, so don’t forget to check it out!