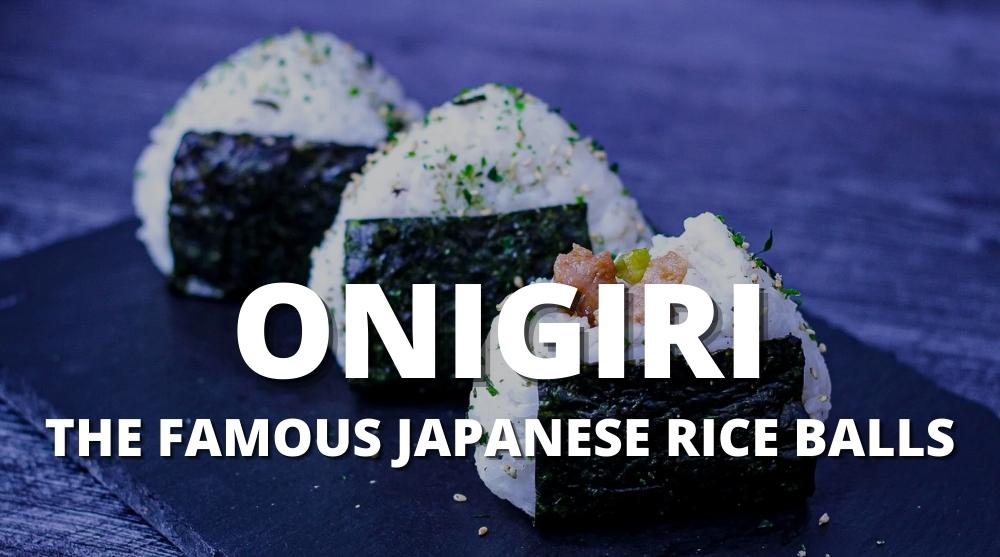 Onigiri (お握り), also referred to as as omusubi (お結び) or nigirimeshi (握り飯)  is a Japanese food made from seasoned rice often wrapped in a sheet of nori (seaweed) and sometimes combined with dumplings and other ingredients like fish, meat or any type of vegetables. The term Onigiri is a combination of the Japanese word “O” (a prefix used to show respect for the individual or object to whom it pertains) and the verb nigiru that means “to grasp”.

Onigiri is one of the most consumed dishes in Japan where it’s eaten either as a side dish, or a main meal. Most popular shape for Onigiri is the triangle, however you can find Onigiri with various shapes from oval to square and even in the shape of a heart. 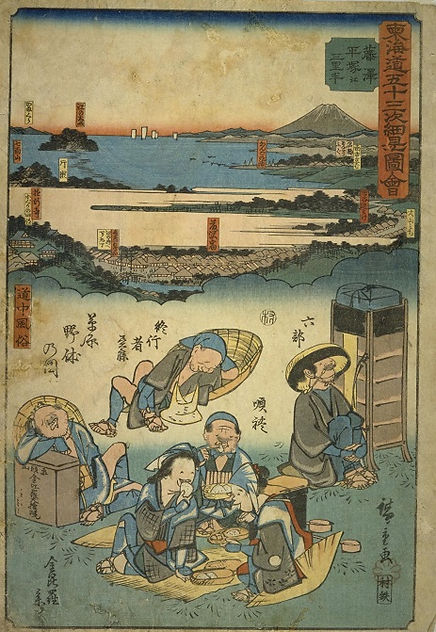 The most ancient form of onigiri may be traced back to the Heian Period (794 to 1185), when a dish known as “Ton-jiki” was particularly popular. Ton-jiki was a snake made of brown rice and packed firmly into an egg shape that was given to domestic employees as a gesture of appreciation during celebrations in imperial or noble residences. The Chinese character “ton” implies “to collect and bundle,” as well as “instantly”.

Originally, onigiri were made of sticky, glutinous rice, but by the end of the Kamakura Period (1185–1333), plain rice had replaced them. But it’s only during the Sengoku Period (1467-1615) that the Onigiri became a valued, handy food as it became to be used as military rations and as a “bento” (packed lunch) for farm work.

The current type of onigiri, which has “nori” (seaweed) wrapped around it, evolved with processed, rectangular seaweed laver, which became popular during the Edo Period’s Genroku Era (from the end of the 17th Century to the beginning of 18th Century).

Bento lunches for train travelers were originally sold in 1885 at Utsunomiya Station in Tochigi Prefecture, and consisted of two onigiri wrapped in bamboo skin with pickled plums (umeboshi) and daikon pickles. Onigiri, grilled fish, and pickles were the first school lunch menus in Japan during the Meiji Period. In Japan, convenience stores originally opened in the 1970s, selling onigiri with a film-wrapped sheet of nori.

Later that decade, new packaging made it easier to wrap onigiri with nori and it quickly became popular among Japanese population. Convenience store like Konbini and supermarket chains have since refined this product into what it is now.

Today, Onigiri is still a cornerstone of the Japanese diet, serving as a warm meal service after a disaster and as a staple or portable food in many situations.

Because it is low in fat, the onigiri is light in comparison to other heavy sandwiches, burgers, or snacks. Rice is a healthy food since it is high in minerals, vitamins, and trace elements. It is both satiating and energizing and the health benefits and low calorie content of nori seaweed are well-known.

However, the rice in a Onigiri has a high glycemic index, so it’s always good to remind you to keep a  balanced diet where Onigiri should be combined to other dishes with high-protein like fish or beef.

Is Onigiri a type of Sushi?

Although onigiri looks a lot like sushi, it is a completely different dish. For example, raw fish and sushi rice with vinegar seasonings are not used in onigiri. Moreover, the distinctive triangular form is reminiscent of the highlands where the Gods once resided.

Furthermore, even in Japan, sushi considered a special occasion dinner, whil onigiri is a regular lunch.

Basically, Onigiri is just a simple Japanese rice ball that is salted and shaped into a triangle, spherical, or cylinder shape by hand or with an onigiri press. However, there are no rules that dictates what is or is not an Onigiri. This means that there are countless types of Onigiri available in Japan to suit anyone’s taste.

Here is a list of the most common types of Onigiri: 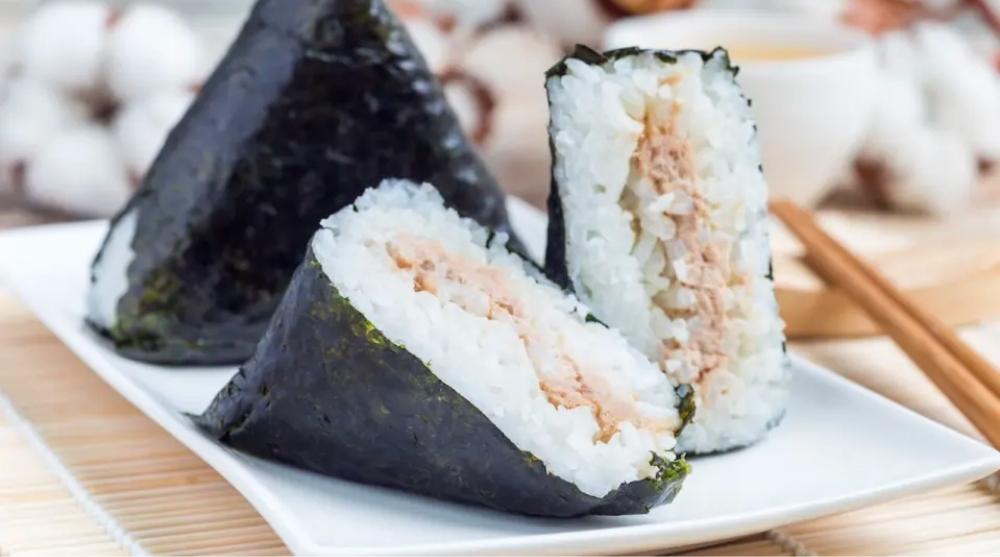 Wrapped onigiri is the most prevalent kind of onigiri, as seen in manga, anime, and TV dramas. A thin sheet of nori (dried seaweed) is the most frequent onigiri wrapper, although additional elements such as takana mustard greens, ooba leaf, tororo kombu kelp, salted lettuce, and so on are also possible. 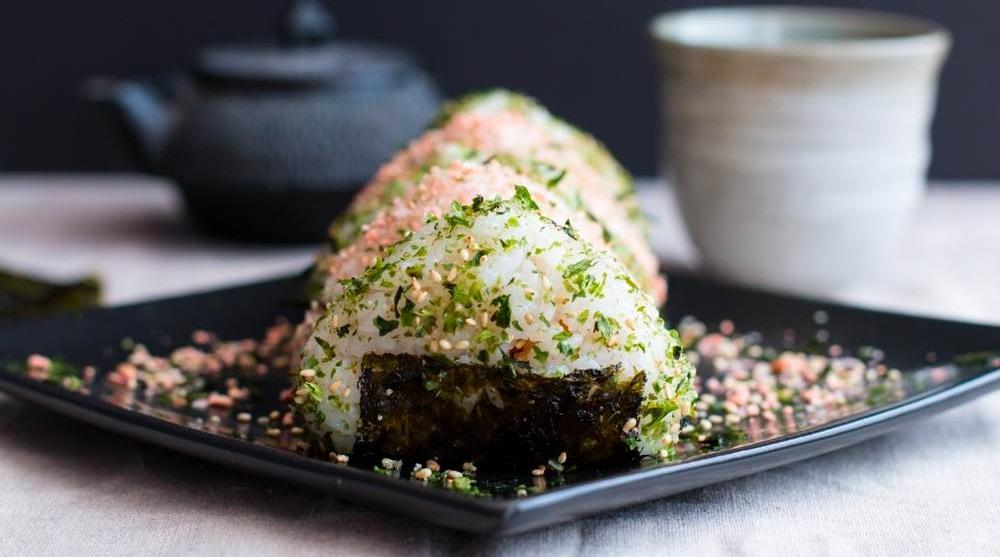 If wrapped onigiri isn’t your style, but you still want something more flavorful than plain salted onigiri, try seasoned onigiri with sesame seeds, crushed shiso leaf, or furikake topping. Furikake is a salty Japanese condiment that goes well with rice. Nori seaweed with egg, ume (pickled plum), shiso, shrimp, and dried fish are some of the most common furikake combinations. 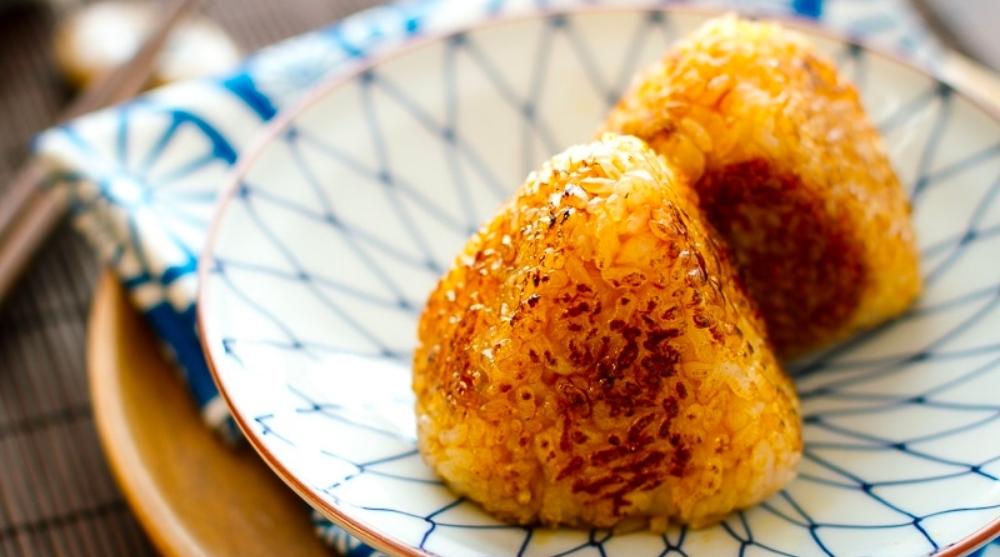 Yaki-onigiri is a sort of rice ball that is cooked on a wire grill over an open flame until it becomes crispy on the outside and then dipped in sauce. If you don’t have access to an open grill, an extremely hot pan, such as a cast iron skillet, can be used instead. Soy sauce glazes to savory miso butter can be used for the sauce. 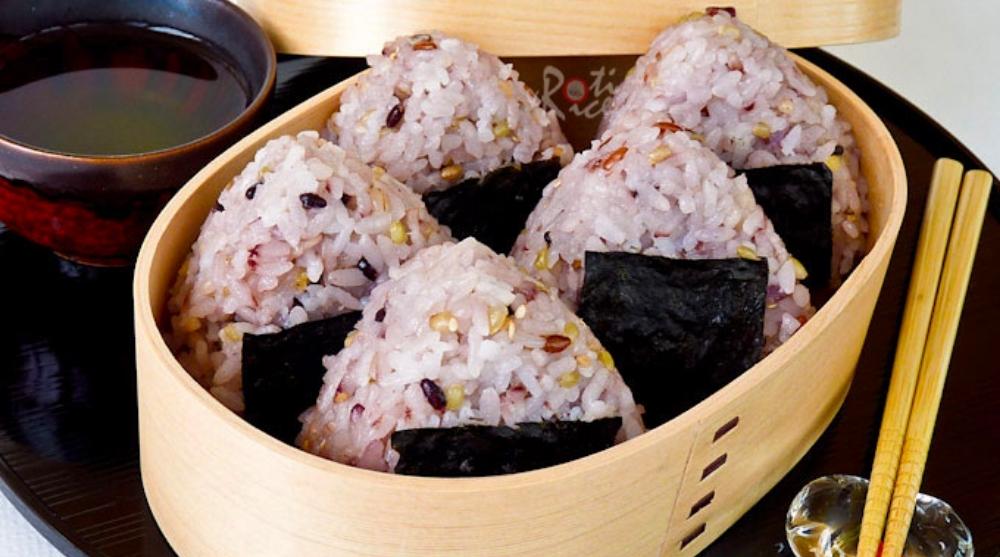 While traditional onigiri are made with plain white Japanese rice, many people prefer brown rice or rice combined with other grains like barley as a healthy alternative. Edamame, wakame seaweed, clams with ginger, or red beans (known as “sekihan”) can also be cooked with white rice. Fried rice (chahan onigiri) or rice pilaf can also be used to cook this type of onigiri. 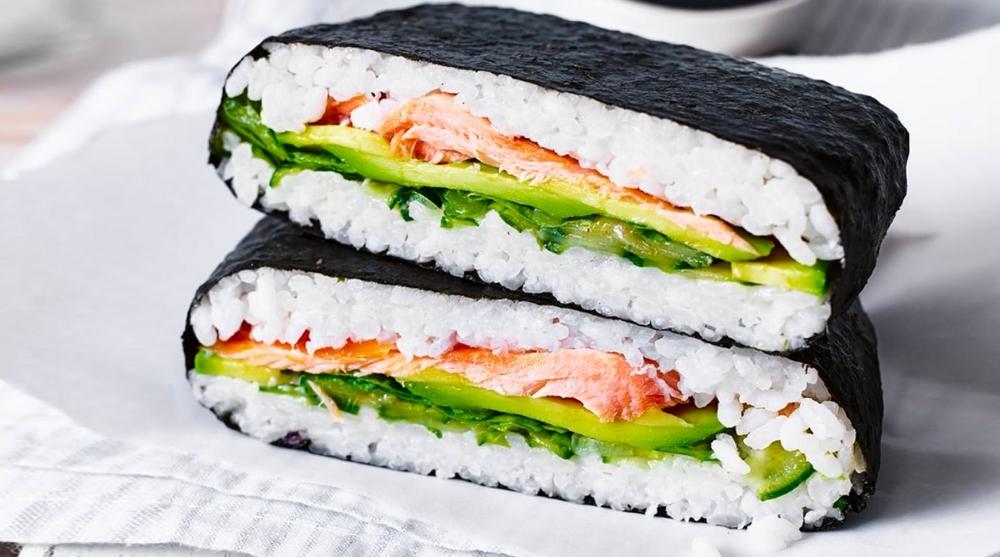 Onigirazu is a type of anti-onigiri that doesn’t require shaping into a triangle or ball shape and has lately gained popularity in Japan. Onigirazu was first published in a popular culinary comic over 25 years ago, but it has only recently gained popularity due to its simplicity of preparation and appealing look. Instead of rolling the onigiri, just wrap the nori over the rice and cut the onigirazu in half like a sandwich, revealing the colorful contents.

Aside from basic salted rice onigiri, rice balls can be filled with a variety of fillings and dumplings such as: 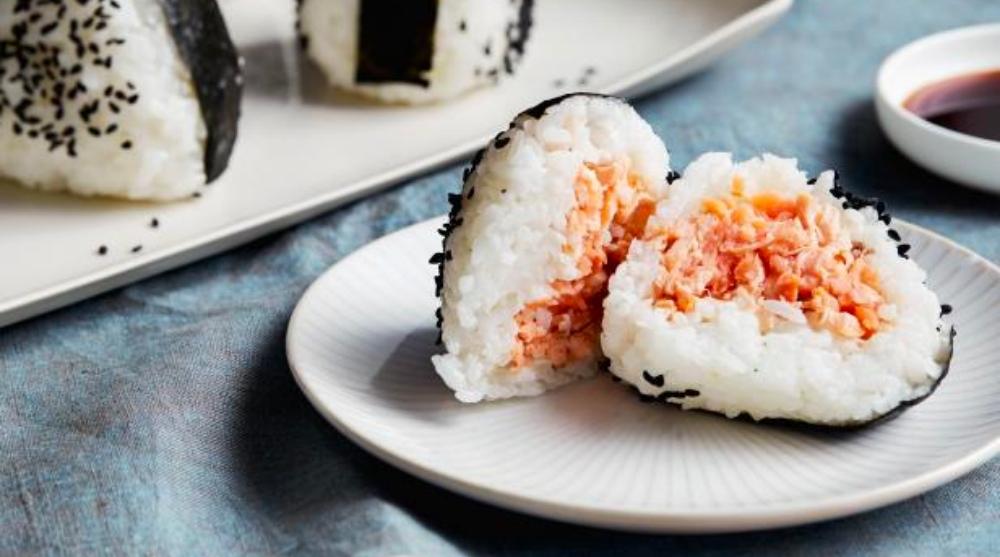 Salmon is among the most traditional of onigiri fillings. It’s called “sake” for onigiri, pronounced “sha-keh” rather than “sa-keh” like the alcoholic beverage, or “shio-zake” for onigiri. Salmon onigiri may contain salty salmon flakes as well as salmon combined with mayonnaise. 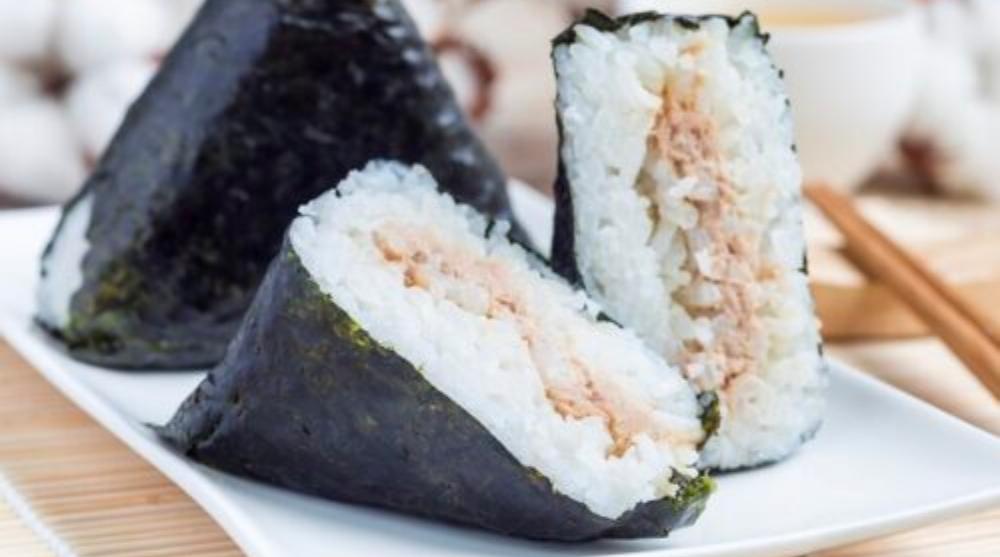 Like sake, tuna is another fish that’s a highly popular filling for onigiri. It’s most commonly mixed with sweet Japanese mayonnaise, and makes for a kind of Japanese take on a tuna salad sandwich. For a bit more luxurious onigiri filling, look for negitoro, or minced fatty tuna mixed with spring onion. You might recognize negitoro as a popular sushi roll ingredient, but the main difference between negitoro rolls and negitoro onigiri—aside from the shape—is that the onigiri version uses plain salted rice rather than seasoned vinegar rice. 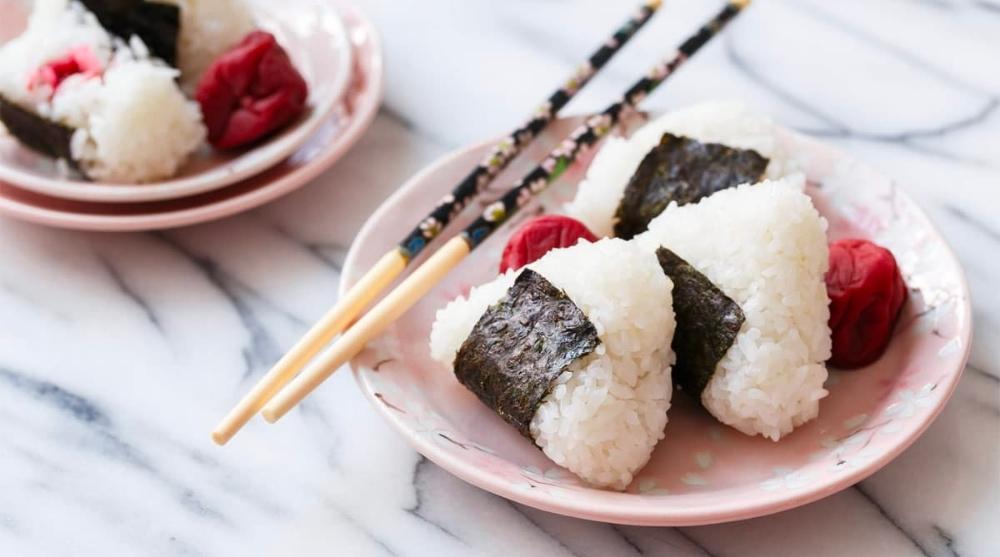 Umeboshi, a tiny pickled Japanese plum with a strong sour flavor, is another favorite onigiri filler. In the core of your rice ball, you could discover umeboshi paste or a full pickled plum—beware of the pit! Ume is a popular item to consume in the summer since it is said to help with summer weariness and heat exhaustion. 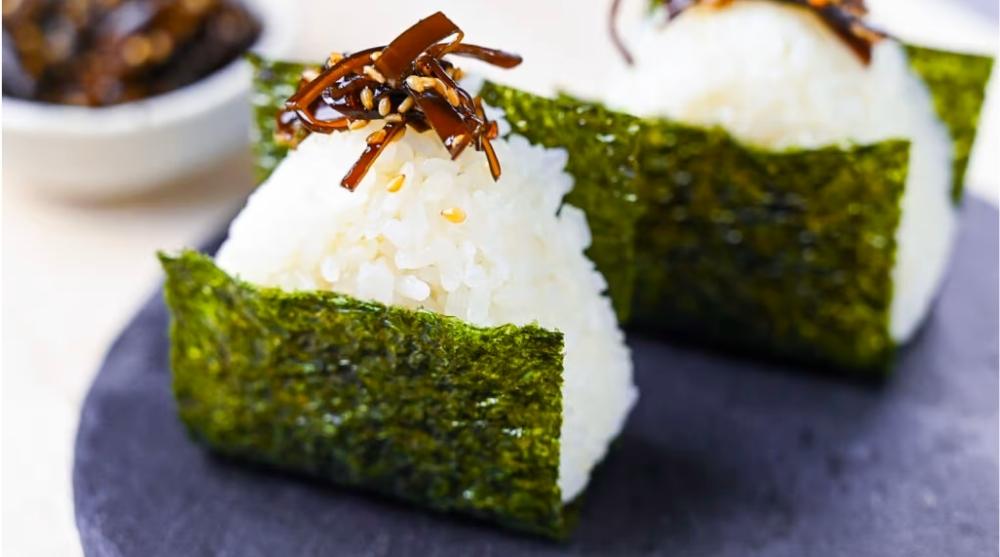 Sheets of dried kelp are cooked tsukudani style with soy sauce and mirin (sweet rice wine) to make kombu onigiri. The kombu can then be thinly shredded or chopped into strips before being stuffed into a rice ball. Vegans and vegetarians will love this onigiri. 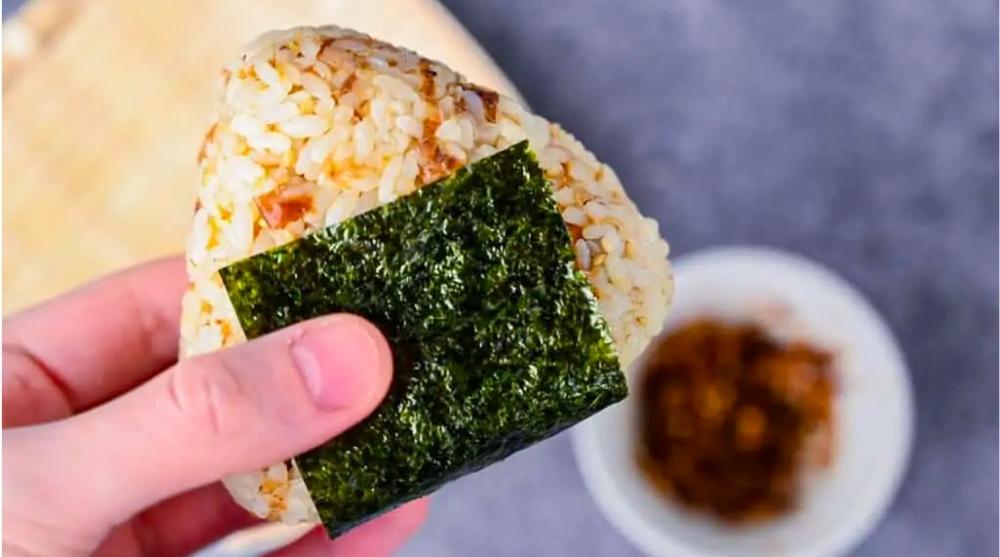 Okaka is a traditional onigiri filling made from bonito fish flakes seasoned with soy sauce for a robust, salty, smoky fish taste. Umekaka, or bonito flakes blended with umeboshi for a salty, sour filling, is quite similar to okaka. 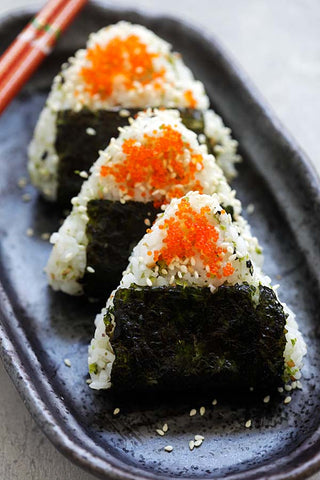 Raw, grilled, seasoned in soy sauce, or combined with mayonnaise, several varieties of delicate fish roe are used to dress a Fish Roe Onigiri. Tobiko (small flying fish roe in a variety of jewel-like colors), tarako (a salted sac of cod roe) and its spicy relative mentaiko, and shimmering spheres of ikura salmon roe are also examples. The fish roe can be hidden inside the onigiri, mixed in with the rice, or encrusted like exquisite diamonds on the top of the onigiri. 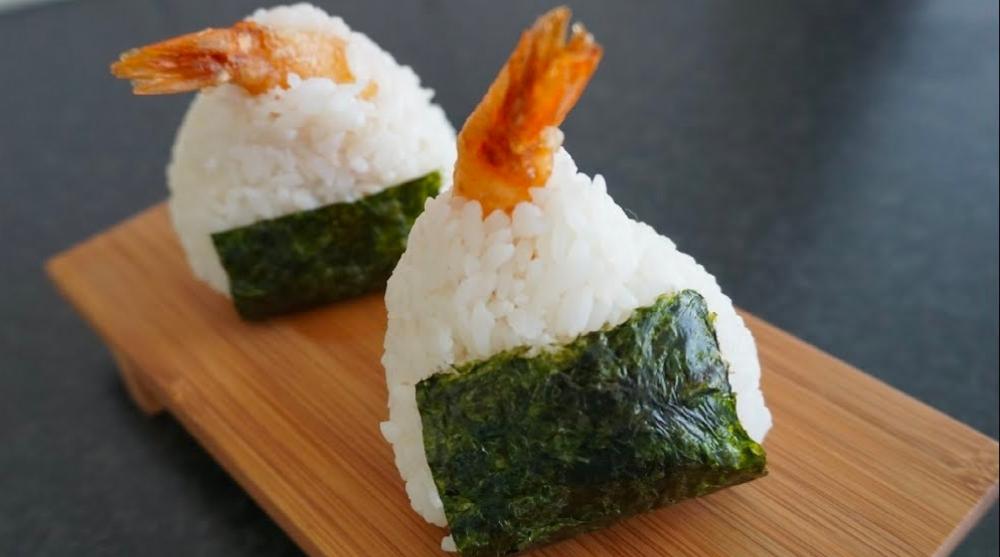 Another seafood salad-like onigiri option is ebi mayo, or prawn with mayonnaise. If you like prawns and want to treat yourself to a special onigiri, opt for ebi-ten musubi (tempura-fried shrimp onigiri).

Vegans, vegetarians, and other vegetable enthusiasts have a variety of alternatives in addition to kombu and ume-flavored onigiri. Sauteed takana (mustard leaf), negi miso (miso soybean paste and Japanese leek), matsutake mushroom, and daikon radish leaf with sesame oil are among the contents. The colorful veggies make for a delicious snack. 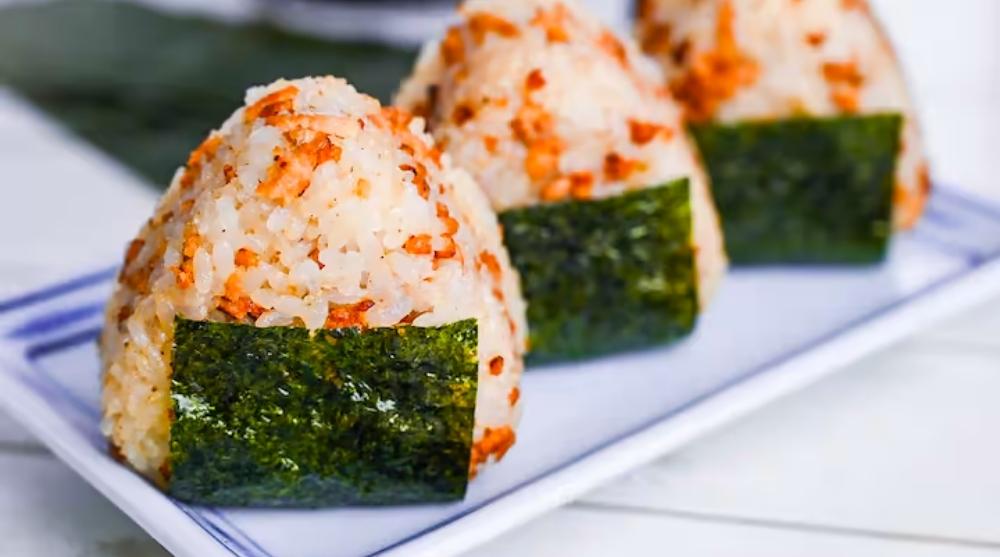 Look for onigiri prepared with chicken for a more meat-like filling. Chicken does not keep as well as other onigiri fillings, so keep it refrigerated or consume it as soon as possible after preparing or purchasing.

How to make Onigiri? Easy Recipe!

Need some visual help? Here is very useful youtube video from Adam Liaw who show you how to make Onigiri plain and simple

To begin, rinse the sushi rice (or any white rice with round grains) several times in a basin or pan until the water runs clean. Drain the rice and set it aside for a few minutes.

To create a restaurant-like result, cook the rice grains in a rice cooker. Otherwise, a regular saucepan will do. 2.5 cups of water for two glasses of rice (1.25 times the volume of rice). Bring to a boil, then reduce to a low heat for 10 minutes. Then turn off the heat and cover the rice for 10 minutes to let it rest.

During this time, you can prepare your filling. For a fish or meat onigiri, this is the time to cook the ingredients in a pan. You can also prepare raw or cooked vegetables by dicing or chopping them. Grilled salmon, tuna with mayonnaise, avocado, leftovers from the fridge or even Japanese specialties such as dried bonito, umeboshi or miso… be creative! Don’t hesitate to buy your ingredients in Japanese grocery stores.

Dip your hands in water and rub them with salt, then sprinkle the rice with the sushi vinegar or seasoning of your choosing. Make a depression in the center of the rice with your palm to place some filling. Then, using your other hand, press the rice into a ball and then a triangle. If you prefer not to cook with your hands, our onigiri mold will help you make a flawless rice triangle in no time. All that’s left to do now is add a sheet of nori seaweed to finish off your lovely onigiri. Wrap the nori leaves around your dish lengthwise.