Famous event aged of several centuries old, the Setsubun festival is celebrated on the 3rd of February every year in all Japan. Little known in the West, let’s discover together what is Setsubun no Hi (節分の日), this festivity where we can see Japanese people throwing Soybeans to the faces of the Oni! #intro

What is Setsubun and what does it mean?

Setsubun (節分) means “separation of the seasons of the year” and refers to the day before the beginning of each season (spring, summer, autumn and winter) according to the lunar calendar.

In the past, Setsubun was celebrated four times a year with the change of the four seasons. Nowadays it is celebrated only once a year, with the arrival of spring and to bid farewell to winter. 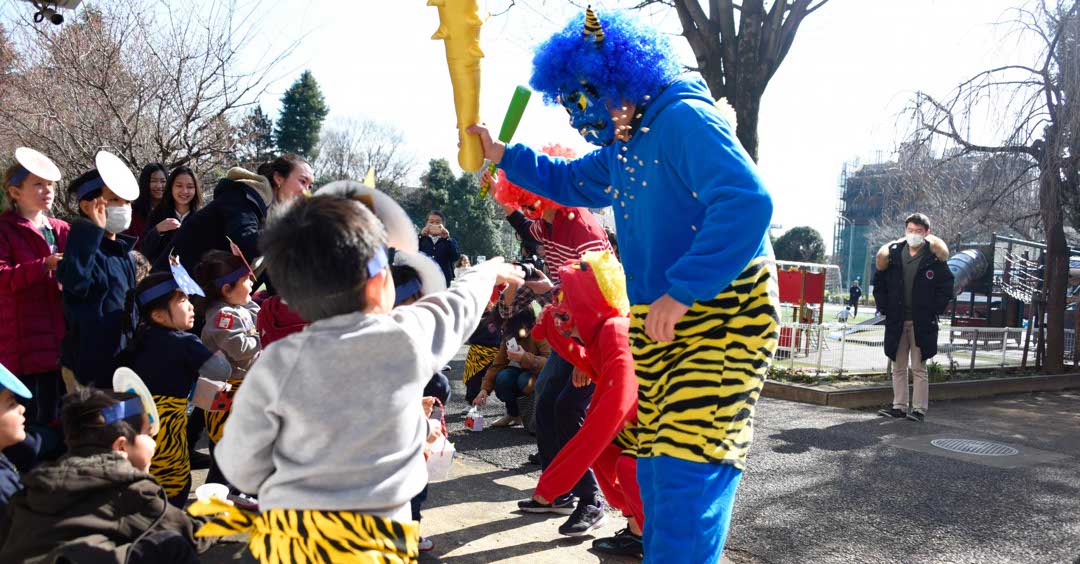 It is said that with the change of season, Oni (Japanese demon) that represent evil spirits come out. To chase them away, what is done inside houses, schools and temples is to throw dried soybeans while saying the phrase:

which means: “Oni out, fortune in”.

What is an Oni? 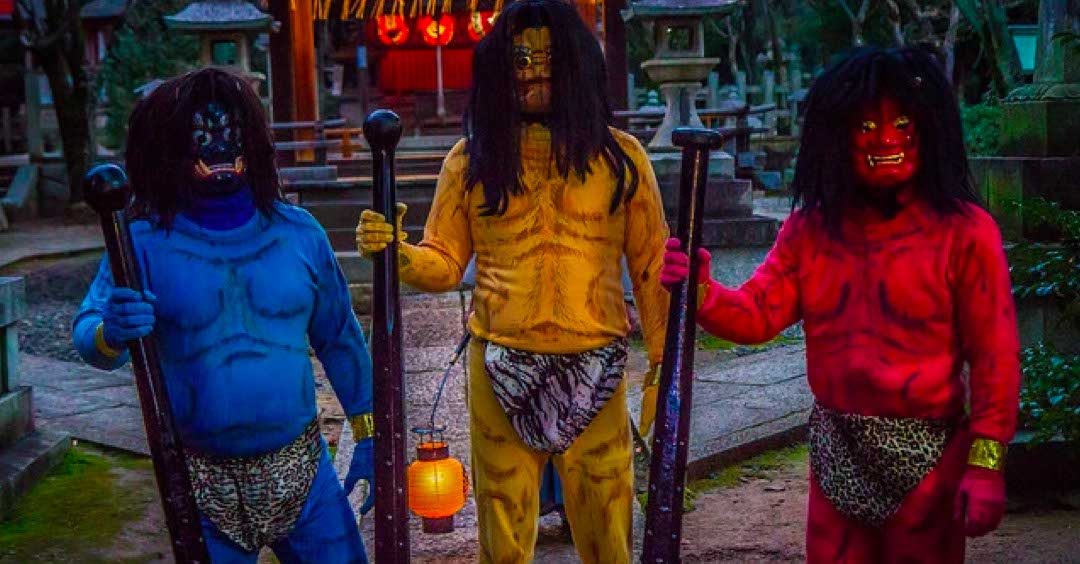 Oni are creatures from Japanese folklore, similar to Western demons or ogres. They represent the evil, the frightening and the powerful.

Oni are represented in various forms, but they are always ugly creatures, with claws, disheveled hair and horns on their heads (one or two). They are usually human-shaped and their skin is usually red or blue (although there are also black, pink and green ones). They usually have a fierce, savage face and seem to be in not too good a mood and wear tiger skins and carry an iron club.

What do we do on Setsubun day?

Nowadays, like the nougat in supermarkets during the Christmas season, there is a special section for soybeans for this day. The packages or bags of soybeans usually carry an Oni mask as a gift. 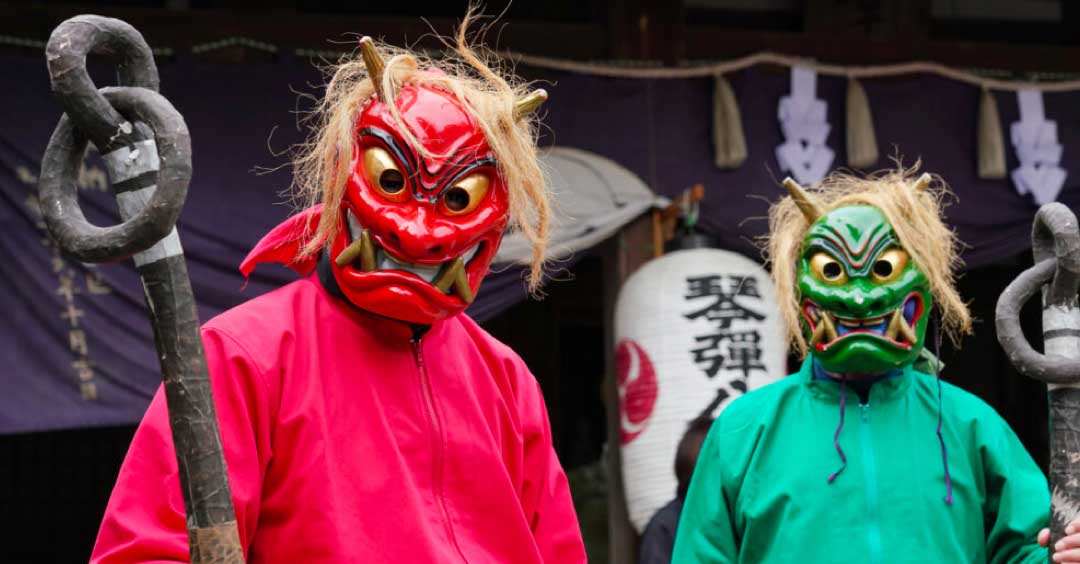 At home, each father puts on this mask and acts as an Oni for the amusement of the whole family that throw soybeans to them. In schools, children throw soybeans at their teachers.

Furthermore, to attract luck, you have to eat as many soybeans as your age. Tradition also says that if you eat more soybeans than the years of your age you will have a healthy year and will not catch colds. 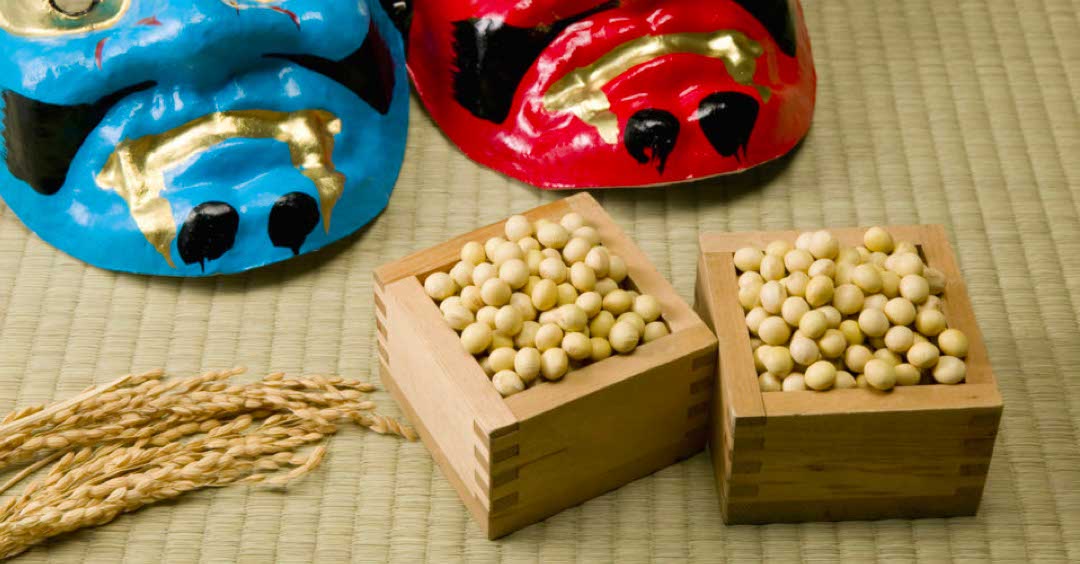 Usual Soybeans that you can find in Japan

Since the late 1970s, in the Kansai region (Osaka, Kyoto, etc.), there has been a new tradition on the night of setsubun. The custom is to eat maki-zushi (sushi roll) facing the direction “Ehou” (the direction changes every year) to bring luck during this year.

This maki-zushi, which is called Ehou-maki (恵方巻き), is rolled with nori seaweed and filled with seven main ingredients representing Japan’s seven gods of fortune: carrot, cucumber, eel, Japanese omelet, shiitake mushroom, pumpkin and tofu. You have to eat it without cutting it so as not to break the good luck and facing the direction that corresponds to the year.

Finally, there are lots of street performances to watch all day along. Here is a very cool video if you want to see what it looks like!