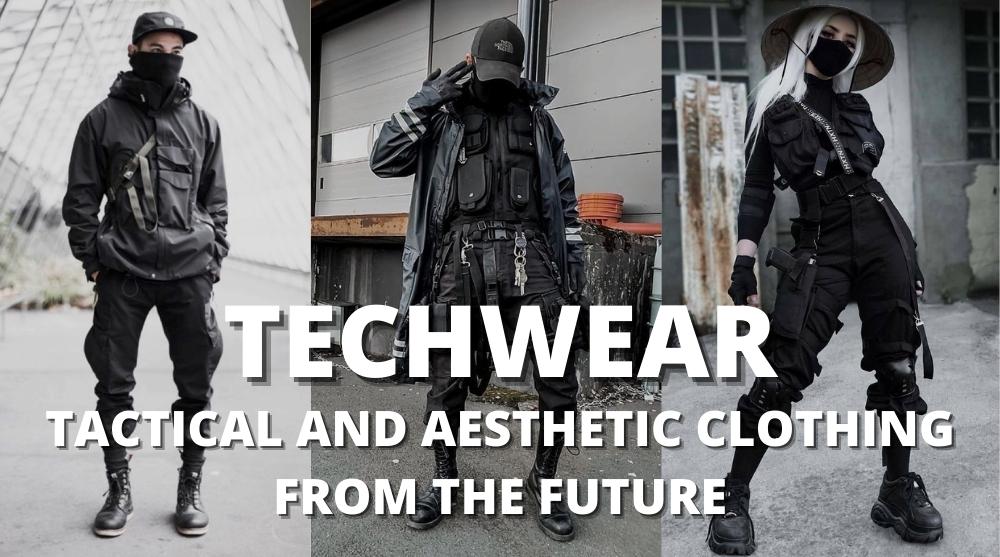 Techwear (short for “technical wear”) refers to a type of clothing made from technical fabrics designed for water-resistance, breathability, windproof and comfort such as GORE-TEX, Primaloft nylon and Polartec fleece. Inspired by Japanese Fashion, futuristic movies, and video games like cyberpunk 2077, Techwear Fashion is also associated to Techwear Aesthetic, a specific type of aesthetic combining both Futuristic and Urban fashion aesthetics.

Are you intrigued by the Techwear style? Would you like to learn more about this fashion? Know what you need to know to adopt an outfit? We’ve put together this Complete Guide to help you do just that. Aimed at both newcomers and those who have already been won over by this look, this article reveals everything.

The beginning of Techwear, as it is worn today, comes from the mountaineering clothing of the early 1970s. These garments were designed to enable extreme sportsmen to brave the weather in the mountains.

Designing garments that keep warm was technically complicated until the advent of Gore-Tex. Techwear was able to use this new design technique in its development.

Initially for professional use, what is literally called “technical clothing” was intended to facilitate the work of many professions. This resulted in practical and comfortable clothing: it had a real purpose.

However, this fashion as we know it today did not yet exist. In fact, it was not until cosplayers and the nerdy community picked up the style. This fashion then experienced a lightning rebound and diversified.

Movies like The Matrix, or more recently Fast And Furious 9, have helped popularise the style.

Techwear outfits are now intended for everyday use, for people looking for a fashion with a strong identity. Today, it is divided into different sub-styles and has taken a futuristic path.

What is Techwear Fashion?

By now you know the story behind this style, but let’s go into detail about its characteristics.

Techwear is a category of clothing that includes special fabrics with advanced technologies. Designed using production methods that go beyond the traditional, with cuts that allow maximum mobility.

Urban techwear is a misnomer when referring to techwear designed for the city. But in reality, Urban Techwear is just one category of Techwear style of which all (or almost all) categories are intended to be worn in urban areas.

The Techwear aesthetic is heavily influenced by futuristic art styles such as cyberpunk (seen in Blade Runner or Ghost in the Shell). But above all it is a style that is meant to be practical. With clothes :

As you can see, Techwear Fashion is not specific and covers a wide range of different styles that you will discover below. Knowing how to distinguish them will help you understand which aspect of Techwear suits you best. It does not prevent these sub-styles from mixing an outfit.

Here is a short presentation of 6 types of Techwear:

Military Techwear is inspired by military clothing as its name suggests. This Techwear military outfits are composed of the most notorious military apparel such as tactical waistcoats, cargo trousers and bomber jackets.

Lunar-core Techwear is an unconventional style that takes shape with white, grey and muted colour palettes (which do not reflect light).

As the term lunar implies, these outfits resemble spacesuits that an astronaut might use. This style does not adhere to the normal proportions of clothes, which are normally much smaller. 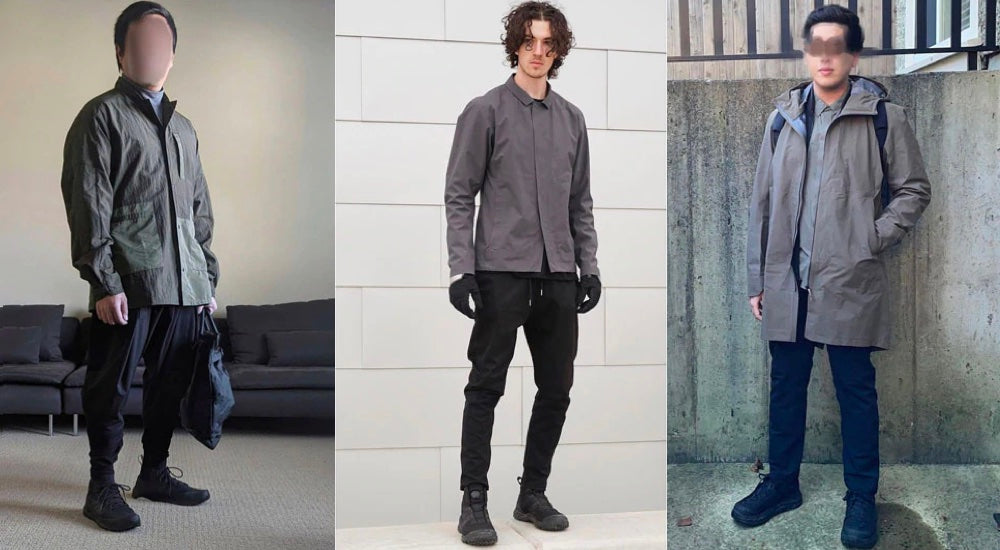 It is the opposite of the lunar style. Greyman clothing is more sober and functional, the objective is to be unnoticed in a stylish and clean outfit.

It takes its name from an intelligence group, where an agent would blend into an environment while being equipped with functional gear.

Literally enough to put yourself in the shoes of a secret agent.

The brands that sell Techwear sportswear are those that use the most technical materials: they are specialised in hiking, mountaineering, sailing or running.

This is the best quality a sportsman can dream of! It’s not for nothing that Nike’s Techwear models are among the most expensive of the brand.

Among other things, you will enjoy professional and durable equipment for sports exercises, all in a designer outfit.

Urban Techwear is a combination between Streetwear and Futuristic clothing. This style offers a very cool futuristic look that is in keeping with the taste of the major fashion houses. The range of colors is often reduced to the bare minimum: black, midnight blue, beige, grey and sometimes white.

Urban Techwear is stylized in the light of a dystopian future depicted in the media of the 80s and 90s and is definitely a must-have in Urban Fashion.

Cyberpunk Techwear is a futuristic style inspired by science fiction films and other video games that plunge us into a cybernetic and robotic universe.

It includes elements such as :

If you are a fan of neon, manga and the future, then you must try the cyberpunk Techwear style.

How to wear Techwear? Full Guide

You now know the 6 Techwear styles but you still need to learn the pieces that make up a Techwear look.

Here are the must-have products to complete your Techwear outfits:

First of all, start with badass outwear like a Techwear jacket: it’s the central element of a Techwear outfit. Ideally wrapped in a neutral color, it’s where the rest of your outfit will start.

There are two types of Techwear outerwear:

Techwear is often referred to as the “middle layer”, i.e. the garment that bridges the gap between the top layer (jacket) and the bottom layer (t-shirt, tank top…).

Ideally, opt for a Techwear hoodie or a Japanese inspired hoodie. The intermediate garment must be warm and allows you to isolate yourself in your shell. They can take many different forms, from down waistcoats to hoodies, insulated shirts and fleeces.

For the bottoms, it’s best to go with military-style cargo trousers. They are practical and add character to your style, regardless of the rest of your outfit.

They can easily be combined with trainers or boots. Cargo trousers have the particularity of having many pockets for storage, which honors their name of “technical clothing”.

Yes, Techwear style is entitled to its own shoes. As a general rule, for a good look, choose black shoes, or boots with a military feel.

Techwear footwear is made up of breathable materials and other features such as integrated zips. These shoes are big and heavy. Nike, for example, has taken advantage of this trend with the release of SFB shoes.

The choice of shoes depends on how you will use them.

Finally, if you want to complete your look, there are also many accessories that will accentuate your style. Understand that these are not always easy to wear, or even to assume.

But that’s what Techwear is all about. Dressing freely, in a tech and futuristic style (for example), so that you live your daily life like a dystopian video game!

So, if you want to go all the way, here is a non-exhaustive list of Techwear extras you can add to your outfit:

They are diverse and varied, but one thing unites them: the Techwear spirit. Whether it’s futuristic elements or simple practical objects to make everyday life easier.

Should I wear Techwear?

Techwear Style is not for everyone as it is a very extravagant style of dress and is very much in evidence on the street.

However, if you want to know if this style will appeal to you, ask yourself these questions:

If you answered “yes” to most of these questions, then you should like the Techwear style.

Of course, you may not love every category of this fashion. But as you discover which ones you like best, you’ll never get tired of what they bring.