Since the influenza A pandemic in 2009, the world seems to have discovered the possible use of the sanitary masks 😷. In Japan, it is since 2011 that we have seen a huge increase of Japanese people wearing masks following a possible nuclear contamination related to the Fukushima power plant. Previously (especially in the 1990s) we heard that in Japan, mainly in megacities like Tokyo, it was necessary to wear masks because of pollution peaks.

More recently, it is the coronavirus 🦠 of early 2020 that put the face mask back in the spotlight. It even became mandatory in many Western countries from spring 🌸 and summer of this year Covid-19.

However, the use of masks in Japan and in many Asian countries is not recent and has been around for quite a while already, even among children from kindergarten. Some even think that this custom has appeared gradually since the Spanish flu pandemic in 1919, which would have caused more than 400,000 deaths. 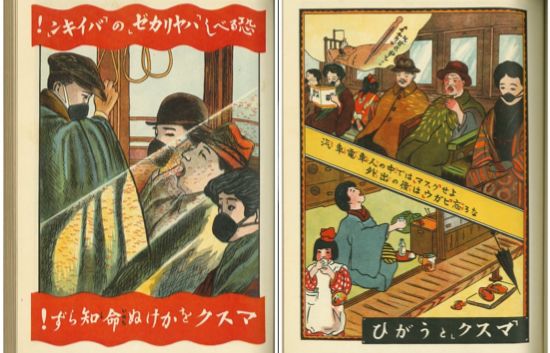 Government prevention posters during the Spanish flu epidemic in 1922

However, there are several other reasons why do Japanese people wear surgical masks in public. Let’s discover them together.

🦠 Reduce the circulation of viruses

First, Japanese people wear face masks most of all as protection for themselves and others. Indeed, there is a custom in Japan, when Japanese people have caught a virus, they wear a mask in order not to contaminate others with their microbes. Given the population density, especially in large cities and in public transport, diseases are more easily transmitted and the use of sanitary masks reduces greatly the epidemic character of viruses such as colds or flu.

Thus, people in contact with many other people, such as train station personnel, are also numerous to wear a mask daily. It is also worn as a preventive measure, so as not to catch a virus if, for example, colleagues cough or sneeze.

In November 2020, the Japanese government authorized cab drivers to refuse customers not wearing a mask, as part of the fight against the epidemic of Coronavirus.

In the same vein, if it is very cold outside or in dry air, wearing a mask prevents breathing the air “directly” and avoids irritating your throat or catching a cold.

Another reason why Japanese people wear mask is to prevent allergies. Pollen density is very high in Japan during spring and summer and many Japanese (between a quarter and half of the population) are allergic. Therefore, wearing a Japanese mask in spring is very common.

💄 Hide their face without makeup or unshaven

Another slightly less glamorous reason why some Japanese wear masks in public is to hide their face when they don’t wear makeup or haven’t had time to shave before going out. Indeed, Japanese society has a great emphasis on appearance, which requires Japanese people to always look at their best all the time.

To overcome this, some Japanese have found the miracle solution. When they did not have time, or did not deign to make up, they will wear a mask to avoid doing it on the bottom of the face. Thus, a “simple” stroke of mascara and/or pencil will be sufficient. The same goes for blackheads or pimples that appear during the night!

It also works for men. If you haven’t had time to shave, you can wear a mask to hide your untrimmed beard, which is a very rude custom in Japan.

As you may know, stars do not hesitate to wear a mask and sunglasses to preserve their identity from the paparazzi.

However, random Japanese people also wear a mask to avoid having to connect socially, as other people tend to avoid starting conversations with those who wear a mask, thinking that they could be sick.

This is a common misconception that probably comes from other Asian countries, especially China. However, Japanese people do not wear face mask to avoid Pollution.

Indeed, Japan has a very low air pollution and, for example, Tokyo is one of the least polluted capitals in the world as it has banned all diesel vehicles since the 1990s.

In Japan, having a good part of the face hidden by a sanitary mask is not a problem, even during social interactions. Indeed, in Japan, wearing a mask is seen as a big mark of respect and hygiene relatively dependent on the mores of Japanese society. That’s why when traveling in Japan, you will come across many people of all genders, ages and seasons wearing sanitary masks.

There are many manufacturers of masks and they are sold everywhere, especially in konbini (local mini-markets) or 100¥ Shops. The quality of the mask depends on the price paid: most of them are made of a rather thick and resistant fabric. The overwhelming majority of the masks sold are white, but there are also more eccentric ones; Japanese children love designs of Hello Kitty, Disney, Sailor Moon or vampire teeth. You even can come across adults wearing masks with in the shape of panties!

The masks of the Japanese brand Pitta are very popular in recent years. People appreciate the thinness of the fabric which makes it very breathable, especially in summer, and the variety of colors available. However, this single-layer anti-pollution and anti-pollen mask does not filter small particles such as viruses. It is therefore not recommended for protection from Covid-19. A new white 3-layer mask, named Pitta Mask 2.5a, is released in Japan in 2020 to address the health emergency.

In 2020, the famous Uniqlo brand releases a mask called AIRism, which is machine washable 20 times and breathable to better withstand the Japanese summer heat. The set of 3 masks is proposed at 990¥ (~7,62€), it arrives in France at the beginning of October at 12,90€.

👒 As a Fashion Accessory

More recently, Asian fashion has taken over the face mask and made it a trendy and stylish fashion accessory for the greatest pleasure of fans of Streetwear and Techwear.

Indeed, in a country where the wearing of masks has been part of its culture for several centuries since the famous Japanese traditional masks worn in Japanese theatrical plays such as Noh or Kyogen, it is normal to see the new generation of Japanese masks 2.0 arrive.

These new facial masks called the Masuku (マスク, lit. “mask”) are the Japanese Face masks worn by Japanese people in the streets of Tokyo and unlike the basic white surgical masks, these are often stylized with original colors, symbols and designs which makes them easy to match with any outfit!

Where to buy chirurgical masks in Japan?

No worries! In Japan, you can buy masks almost everywhere. You can find them in drugstores, supermarkets, konbinis (small grocery stores like 7-Eleven, Lawson, Family Mart…) or even in larger stores like Don Quijote.

In short: you will not have any trouble finding them, and in all sorts of formats. There are boxes with 5, 10 or more masks. The price for basic masks should not exceed 80 yens (~0.72 US$) per masks.