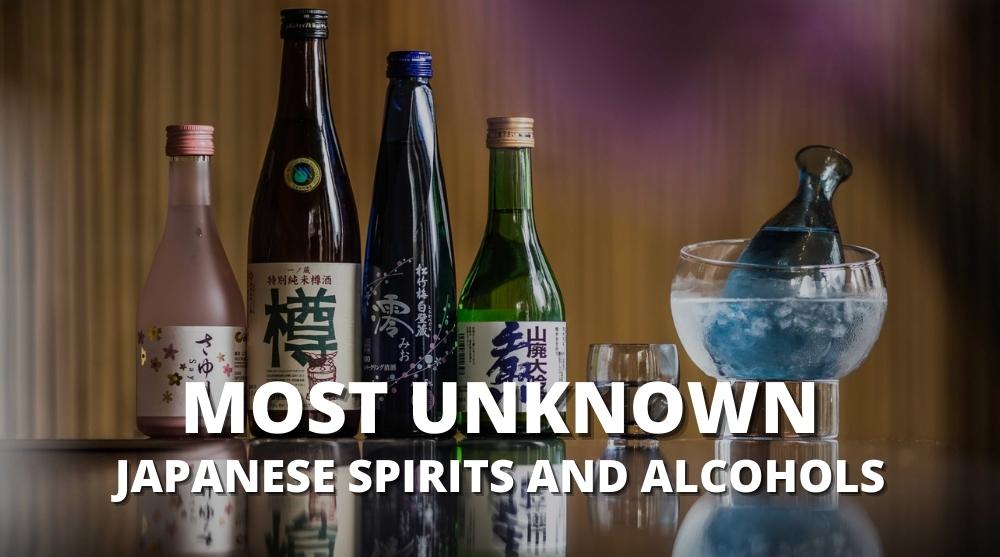 The Land of the Rising Sun is full of cultural and gastronomic treasures. Beyond the Japanese gastronomy and its well-known dishes such as sushi or ramen, Japan also owns delicious and sometimes unknown alcohols referred to as “sake”.

Indeed, in Japan, most Japanese people use the term sake (酒, lit. Alcohol) as a generic term for any alcoholic beverages. Although the term “sake” most often refers to fermented rice alcohol in the West, in Japan, it is typically the word everyone uses to refer to alcoholic beverages such as beer, spirits or liquors.

So, let’s discover the most unknown Japanese alcoholic drinks with the 6 main Japanese spirits that Japanese people drink in Japan!

Japanese fruit liquors are differentiated from each other by the fruits they are made of, their alcohol content, their method of distillation, and they are among the most common alcohols consumed in Japan.

Among the most known is the Japanese plum liquor: Umeshu, a very soft and sweet liquor used in cocktails or alone for tasting. But there are also stronger fruit liquor such as Yuzushu, a lemon liquor, traditionally served with fish dishes.

Traditionally, the Japanese often make their own liquors, with fruits of their choice macerated in strong alcohols. While what is traditionally called sake looks more like a kind of beer (fermented drinks with fairly light yeasts in alcohol) fruit liquors are more faithful to the image we have of sake – Japanese alcohol – with fairly strong alcoholic drinks. However, Japanese liquors generally have a lower alcohol content than our Western liquors (between 14° and 17° for Japanese drinks). If you are traveling to Japan, do not hesitate to taste them, dry or in cocktails, in moderation of course!

Shōchū (焼酎, literally “distilled liquor”) is traditionally made from rice, barley, buckwheat, sweet potato and brown sugar. This Japanese distilled alcoholic drink generally contains an alcohol content of between 20° and 40°.

Shōchū can also contain chestnut or shiso, or other amenities. Originally from South East Asia, Shōchū is a very old alcohol in Japanese culture: the first traces of this alcohol in the country’s writings date back to the 16th century, in Kyūshū. Considered the place where this alcohol was created, Kyūshū was able to develop this rice alcohol (Japanese sake).

There is one subtlety in Shōchū: there are three different distillation processes in its manufacturing process. There are honkaku and otsurui which are single distillation processes (single distillation) and kōrui which is multiple distillation method. In Japanese salons where yukata is worn, it is often drunk dry or with ice cubes, it can also be diluted with warm or hot water. Also, cocktails are composed of Shōchū, such as long drinks where alcohol is extended with non-alcoholic drinks: fruit juice (blackcurrant, grape, in syrup), soda, or even Oolong tea (Chu-hi, sold in a can).

Japanese gin mainly consists of several ingredients such as yuzu peels, Japanese cherry blossoms and leaves (sakura), green teas and sansho pepper. There are also a large number of aromatic plants that differentiate it from other alcohols and make it unique (such as juniper or orange peel).

While the most famous Japanese spirits are ancient and traditional spirits, Japan has been reinventing gin only for a few years. There are thus distilleries which manufacture Japanese gin, such as in Osaka, Myagikyo or the distillery of Kyoto.

Gin falls into the category of white spirits (like white wine). It is also quite a strong alcohol, since its alcohol content is generally between 45° and 50°. Japanese gins are made with maceration and distillation processes. The history of gin in Japan is fairly recent, but there are still some traditions regarding its consumption. It can be drunk as it is or diluted in Japanese cocktails. This strong, fresh and strong alcohol, its aromas and sweet flavors have met with great success.

Originating in Okinawa, Awamori is a type of distilled alcohol made from rice, water and yeast. Depending on the age of the drink and therefore the fermentation time (with the sugar), the alcohol content varies. On average, Awamori contains about 30% alcohol. This beverage has stood out from the Shōchū in history, the yeasts used are not the same, nor even the rice chosen to create each of its two drinks.

Awamori is traditionally drunk with water and ice. For the greatest amateurs, it is consumed pure with ice cubes. In any case, it is an alcohol that is drunk very fresh (like well-known alcohols such as cider, martini, vodka or other spirits). Among the distilled drinks it holds a place of choice: in the consumption of alcoholic drinks in Japan, it is positioned among the best-selling (in bars and alcohol outlets).

Japanese Rhum is made of cane sugar and mainly produced in the islands of southern Japan where the climate is warmer.

Although less well-known than other Japanese drinks, Japanese rums are of high quality and come from a special history. Mainly produced in the south of the country, the different kinds of Japanese rum are among the country’s most popular alcoholic beverages. Made from molasses, it is distilled in the Japanese tradition, ie in traditional iron stills. If it is mainly produced in the islands of southern Japan, it is because it is only in these warmer places – where the Japanese fan is required – that the cane sugar is cultivated for its production.

Like Calvados or Armagnac – to speak of alcohol that we Westerners know – it is rather consumed at room temperature to release all its subtle and worked aromas. Although the consumption of alcohol in Japan is moderate consumption, rums from the land of the rising sun are widely consumed: a large amount of alcohol of this kind is sold in Tokyo , in Japan but also around the world.

Until recently, Japanese whiskey was still unknown in the West, but today things tend to change. In recent years, the quality of Japanese whiskeys has been recognized around the world and this drink has become almost as famous as the traditional Japanese kimono. The history of whiskey in Japan dates back to the 1850s, when Americans brought this drink. The Japanese started producing their own barley whiskey a few decades later, initiating a long Japanese tradition, creating their own casks from mizunara (Japanese tree).

After having long copied the Scots, Japan has long created whiskeys of two kinds: single malt and blended whiskey. A glass of whiskey can be consumed as an aperitif as well as a digestif, although it is still thought of as a digestif. Today, Japanese whiskeys are placed on the fourth step of the world whiskey sales podium, behind scotch whiskey, irish whiskey and American bourbon. Japanese whiskeys are very high quality and their price per liter can become very high, like some wines. In Japan, it is eaten dry with ice cubes, or alternatively diluted with water, still or sparkling, always with ice.

These Japanese spirits prove to us that in the land of the rising sun, drinking is also an art, just like food, although it is better known. Japanese flavors are a real institution (we know, for example, Umami). Since excessive alcohol consumption is a general public health problem, the Japanese tend to drink alcohol in moderation. Japanese spirits must be savored and are created for tasting, not for irresponsible consumption, think about it if you want to discover them: always drink in moderation!