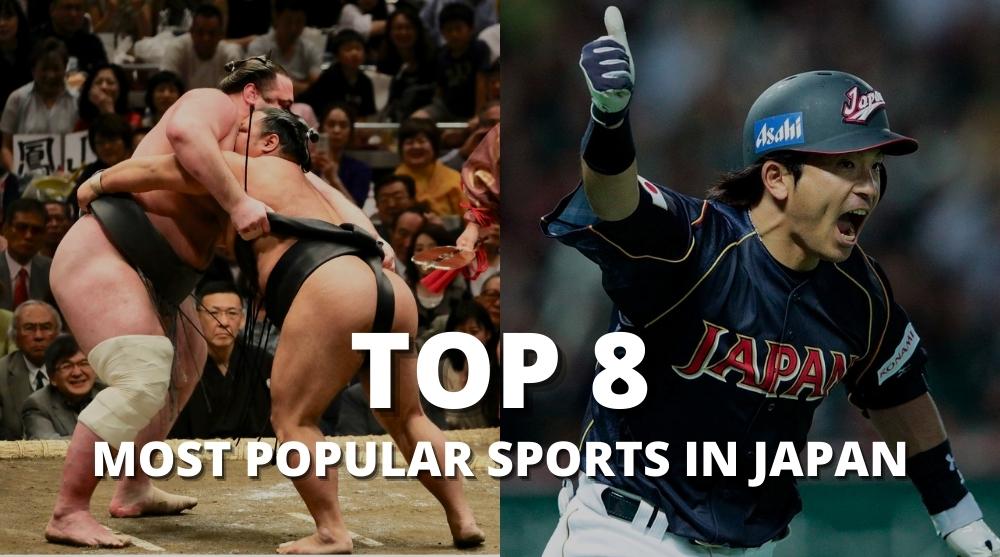 When people think about sports in Japan, most of them often think about Sumo, Karate, Aikido or any other type of martial art.

But even though Japan has spent much of its history isolated from the rest of the world, however, the country quickly adopted a wide number of sports which were introduced when it opened itself to other countries at the end of the 19th century.

So let’s discover today’s the top 8 most popular sports in Japan that may surprise you!

Puroresu (from the term “Pro Wrestling”) is the Japanese version of American Wresting formerly introduced in Japan in 1951.

The spread of this sport is widely attributed to the first major star of the puroresu in Japan, Rikidozan, a former wrestler of sumo who gave Japan a hero as the country struggled with its post-war identity crisis. Popular wrestlers in more recent history include Giant baba, Antonio Inoki and Tiger Mask (actually a chain of four wrestlers who took turns wearing the mask). Lovers of J-pop might even recognize Ladybeard, o fLadybaby, who debuted in Japanese puroresu in 2013.

Japanese puroresu is not as focused on the scenario of fights than its American counterpart. They are more Athletics, apparently due to the fact that many wrestlers studied various disciplines of martial arts.

When the Commodore Perry ordered the opening of Japanese ports in 1854, his men introduced boxing to the nation, surely the combat sport the most famous in the world. Tsunekichi Koyanagi, a wrestler of sumo class ozeki, a high-level athlete, was chosen by the shogunate to challenge a boxer and a wrestler in a series of mixed martial arts fights. The sport then gained momentum, with the first major exhibition fight taking place in 1887.

Yujiro Watanabe, considered the father of the japanese boxing, trained at the age of 16 in California before returning to Japan and creating the Nippon Kento Club in 1921. A number of boxing federations and associations sprang up in the years that followed, to lead to the creation of the Professional Association of Kento of Japan in 1931, which would eventually transform into the Japanese Professional Boxing Association (JPBA), a name it has kept since 2000.

The rules governing the professional boxing in Japan are established by the Japan Boxing Commission (JBC) to encourage boxers to fight within the country. Very few male boxers attempt to secure international titles, and japanese champions are generally not recognized around the world.

Auto racing competitions have been around in Japan since the 1920s, but it wasn’t until the opening of Tamagawa Speedway in 1936 that the sport got a permanent and dedicated track. Soichiro Honda, who would later found the company automobile eponymous, was one of the first competitors of the new track, while the new Nissan competed with its own factory team.

After establishing his company, Honda in 1962 opened the Suzuka International Racing Course, better known as the Suzuka Circut. The track has hosted many major events of the championship of world, in particular Formula 1. Mitsubishi is not left out and also opened in the early 1960s a racing circuit, the Fuji Speedway (now owned by Toyota). Almost all of Japan’s major races have taken place on one of these two circuits, although there are over 20 car circuits in total in the country.

Like many sports from this list, golf was imported from the West after the Meiji Restoration (1868-1912). A British expat by the name ofArthur Hesketh Groomhad lived in Kobe for 33 years, and was tired of not being able to play his favorite sport. So he set off with his friends to make a journey of golf of four holes on Mount Rokko, which forms the backdrop to Kobe. The original course was completed in 1901, but was expanded in 1903 to nine holes and become the Kobe Golf Club.

For a while, golf remained almost exclusively a sport for expatriates and Japanese educated in the West. The opening of a course in Tokyo in 1914 made it known to members of the Japanese elite more traditional, and interest quickly spread to see 71 courses opened across the country in 1940.

While the social class system Japanese was disrupted after World War II, more and more members of the new middle class began to play golf, creating a new wave of golfers. Golf was a new place of activity and a sign of upward mobility until the economic bubble collapsed in the early 1990s.

Today, golf is no longer limited by age, social class or gender. Most popular Japanese golfers are all very young, especially Ryo ishikawa, who became famous at the age of 15, as well as Hideki Matsuyama and the high level golfer Ai Miyazato. In addition to the many golf courses in the country, you will also find green net golf courses almost everywhere in the country.

Sumo is often considered the National sport of Japan, and has been around since Antiquity. Stemming from a Shinto ritual of wrestling between a man and a god, professional sumo tournaments began in 1684 at the Tomioka Hachiman-gu shrine in Tokyo.

Each year there are six tournaments of sumo throughout the country, each lasting 15 days. The lowest ranked wrestlers compete in matches early in the day, and the stands slowly fill up as the top-ranked athletes make their way to the ring, or dohyo. The two highest ranked wrestlers, usually a yokozuna and/or an ozeki (the highest and second highest for sumo wrestlers) compete last to close the match tournament.

The yokozuna is a very prestigious ranking, which is in fact held only by non-Japanese wrestlers since the year 2000, with many athletes incredible coming from Mongolia. Its counterpart in terms of popularity would surely be the judo or karate.

Tennis is believed to have first arrived in Japan in 1878, when five courts were built in Yamate Park in Yokohamato be used by foreigners. The same year, George A. Leland was asked to introduce Wetern-style physical education to Japan, and his contribution is widely believed to have allowed tennis to become widely taught across the country.

However, the expense of purchasing materials for standard tennis balls led to the development of “soft tennis“, which uses a soft, all-rubber ball. In 1886, soft tennis was the standard form of sport practiced at Japan, and it is still taught in public schools across the country to this day.

Tennis has taken an important place in theJapanese culture. It was in this sport that Japan won its very first Olympic medals, both won by Ichiya Kumagai at the Olympic Games in Antwerp in 1920. The Emperor of Japan Akihito met the empress Michikoon a tennis court in the resort town of Karuizawa in 1957.

The manga series Prince of tennis has sold over 50 million copies. And since he became the only player of japanese male tennis to rank in the top 10 in singles tennis, Kei nishikori has, since 2015, drastically increased the popularity of the sport in Japan.

Long before the soccer, one of team sports the best known, there was an ancient sport of “kick ball” called cuju which developed in China and spread to Korea as well as Japan, where it was renamed kemari. In the 19th century, the modern sport of football (aka soccer) was introduced to the country by Lieutenant-Commander Archibald Lucius Douglas of the British Royal Navy, who taught it to Japanese sea cadets between 1873 and 1879.

If football associations were created in the 1920s, it was not until 1930 that Japan acquired a national team. And in 1936, Japan made its debut in Olympic Games from Berlin, this athletic event where he celebrated his first victory by winning 3-2 against Sweden. Before WWII, this sport was commonly referred to asshukyu(蹴 球, literally “kick-ball”), but it came to be known as “soccer” (orsakkaa) due to post-war American influence.

The first organized national league was created in 1965, made up of eight amateur clubs. A bronze medal at the 1968 Mexico Olympics boosted the sport’s popularity, but it stuck semi-professionaluntil 1992, when the Japanese League professional football team, commonly known as J.League, was formed, consisting of nine semi-professional Japan Soccer League teams and the new Shimizu S-Pulse.

At the level of international competitions, Japan is struggling to find a place and is still very far from the title of world champion or the gold medal. However, Japanese football remains one of the most popular sports, one of most popular sports, and the one that brings back the most viewers and practitioners.

Today, there are 18 clubs of professional football in Japan. A number of star players have come from the J.League, including Kazuyoshi Miura, Hidetoshi Nakamura and Shunsuke Nakamura, they each have an exceptional track record. While several key players play for football clubs around the world, such as Makoto hasebe and Keisuke Honda, this kind of athlete being paid better than their colleagues. The men’s national team is known as the Samurai Blue.

While the women’s football less popular outside of domestic tournaments, the Japan women’s national soccer team, known as Nadeshiko Japan, garnered a wave of attention after beating the United States in the FIFA Cup final. FIFA Women’s World 2011.

One of the most notable sportswomen today is undoubtedly Asako Takakura.

Baseball is the undisputed top sport in Japan, and is ironically called the national sport of Japan (Japan actually has no officially recognized national sport, not even sumo or kendo).

While most Japanese would understand the word “baseball”, it is locally called yakyu, Where puro yakyuto describe the professional league. Even high school baseball is taken very seriously, with the national championship of baseball in secondary schools (called Koshien), a very popular event every summer.

Although baseball was introduced to the country in 1872, it took 64 years before a full professional league was formed in 1936. This league included the Tokyo Kyojin (now the Yomiuri Giants) and the Tokyo Tigers. ‘Osaka (now the Hanshin Tigers). In 1950, the league was big enough to split in two: the central league(made up of former teams) and the pacific league(made up of new teams), which, to this day, compete against each other in the framework of the Japan Series every year in October.

There are some differences between the japanese baseball and American baseball. The Japanese ball in Baseball is slightly smaller, as are the strike zone and the ground of Game. Regular season games are limited to 12 innings and playoff games are capped at 15 innings, meaning teams can be tied. However, the leagues appeal to US and foreign players, although only four foreign-born players can be on a team’s active roster. However,Randy Bass still has the best batting average for a season at 0.389.