When summer arrives, the climate heats up enormously on the Japanese archipelago and temperatures can rise up to 45°C (113°F). To overcome this, Japanese fashion has updated a famous apparel, formerly used as indoor clothing, so that it can be worn outside. You may have guessed it, it is of course the famous Jinbei.

Jinbei (甚平), also called jinbē or hippari, is a traditional Japanese garment made of strong and natural materials such as hemp (linen) and cotton, and worn by Japanese men and women during the summer period. Traditionally, it used to be composed only by a top, but, nowadays, Jinbei are made of a short-sleeved top and short pants set.

Soft, airy and comfortable, the Jinbei is really the perfect outfit for the summer when you don’t want to dress up your Yukata. Let’s discover together a little more about this famous Japanese apparel. #intro 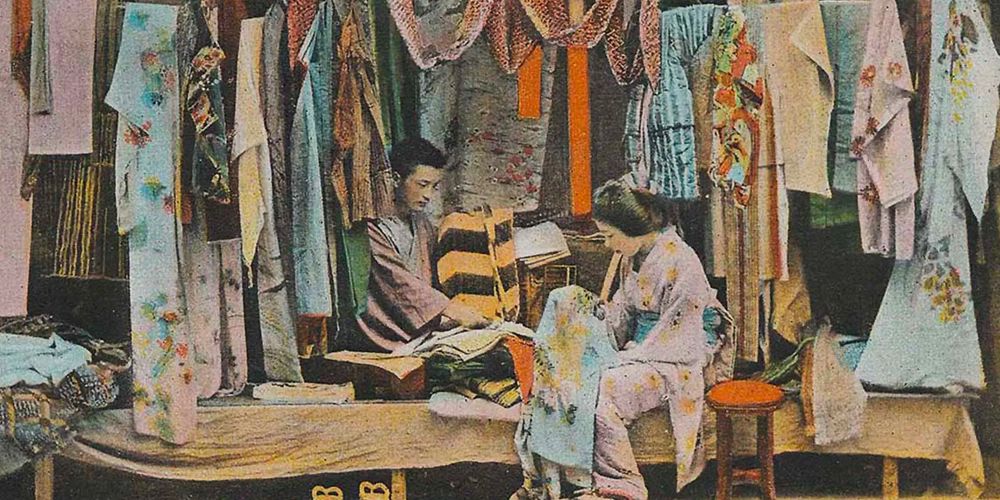 Before becoming the perfect summer outfit, Jinbei was at first garment worn by low-ranking samurai during the Sengoku period (1467 to 1615). Indeed, according to its etymology, the Jinbei is the evolution of the jinbaori, a fighting outfit intended to be worn during a battle.

The jinbaori was a very simple garment, easy to wear, easy to take off and provided a great freedom of movement. The Jinbei is therefore the commoner version of this garment, adapted for all. Later, the Jinbei was exclusively worn at home by men.

In fact, for Japanese men, wearing a Jinbei was an integral part of Japanese customs. It was not uncommon to see them wearing this wafuku (Japanese traditional clothing) while doing their daily chores such as gardening or while walking around their home. At first completely restricted for men, it finally democratized itself to the other gender and started to be worn by women. 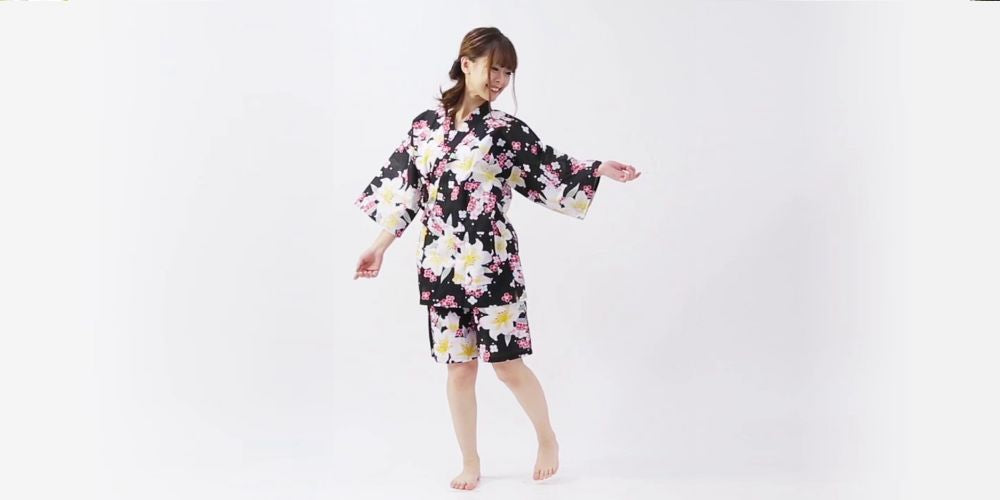 Traditionally, Jinbei were made of plain or fine stripe prints with sober colors such as navy blue, indigo, gray, black or green. Today, as a festive garment, the Jinbei is often colored, embroidered or adorned with pretty patterns to be visible from afar. Of course, the old versions are still available to satisfy the more traditional among us.

Finally, most of the Jinbei sold on the market are unisex. However, women’s Jinbei tend to choose more feminine patterns with soft colors with floral prints or embroideries of kanji, gods, or creatures from Japanese mythology such as a dragon or a phoenix.

How to wear a Jinbei? 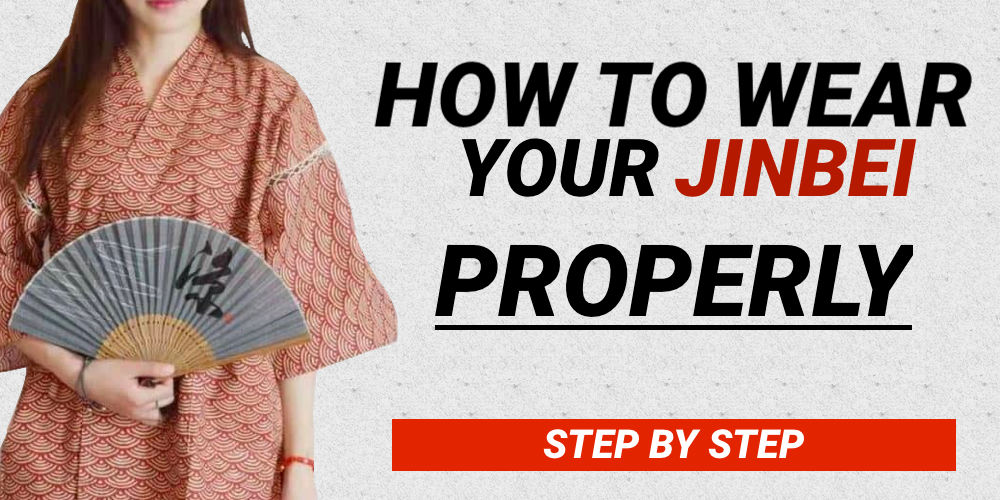 As a traditional Japanese garment not dedicated to formal events, wearing a Jinbei does not require as much protocol as wearing a Yukata, a hakama or a Kimono. Moreover, wearing a Jinbei is pretty much like wearing a Kimono, the only difference is that the Jinbei is not closed with an obi belt, but with a knot on the side.

To wear a Jinbei, here are the 3 steps:

If you want something visual, here is a short and informative youtube video made from Kazuya Murakami who explains you very precisely the different steps mentioned above.

Just as Kimono and Yukata, Jinbei shouldn’t never be tied up from left to right.

✅ When to wear a Jinbei? 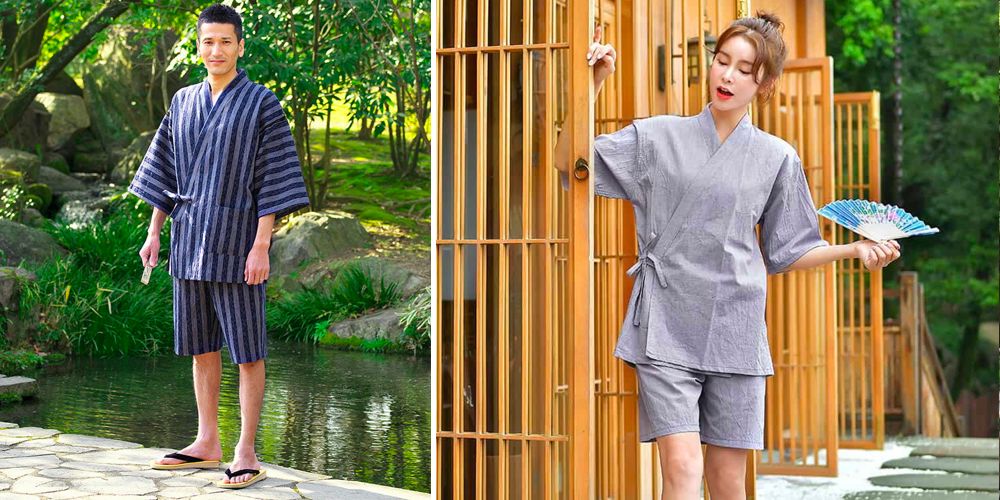 Initially considered as an indoor garment, the Jinbei has been for a few seasons the most popular garment to face the heat of the summer. In fact, this casual, loose and light garment offers an excellent feeling on the skin and is very soft and airy. Thus, the Jinbei can now be worn both indoors and outdoors, especially on hot summer evenings.

However, even if it is not very frequent, you can wear your Jinbei even during the cold seasons by slipping a cotton t-shirt under your jacket. You can also opt for versions with pants instead of shorts, or even Jinbei made of thick, warm and cozy cotton.

Moreover, Jinbei is also a popular garment that Japanese people like to wear during cultural festivities such at Matsuri and fireworks (called Hanabi).

In summary, you can wear a Jinbei:

❌ When not to wear a Jinbei?

As explained above, the Jinbei is used during festivals as a substitute for Yukata for example. However, it should be noted that Jinbei cannot be worn on distinguished occasions. You must not forget, the Country of the Rising Sun attaches a particular importance to respect and image and the least thing that you would like to do when you’re on a trip in Japan, is offending their customs.

Therefore, the Jinbei shouldn’t be worn during special ceremonies, important events or at a Japanese club.

How to choose your Jinbei? 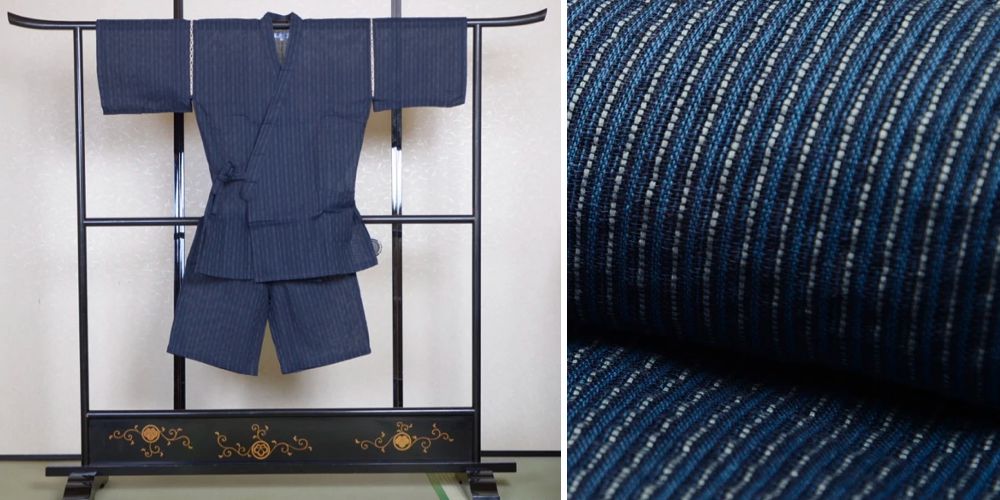 As explained before, there are no strict rules to wear a Jinbei, however, one thing to be careful about is the material of which it is made. Indeed, the comfort and quality of your Jinbei will depend mainly on its composition. Generally, the majority of the Jinbei are made of either 100% cotton, linen or a mixture of both.

However, cotton is the way to go as it is the material of choice for Jinbei even though it is a bit more expensive. Cotton has a very soft feel and is very easy to clean. Linen will tend to wrinkle more easily, but on the other hand, it will give you a feeling of lightness.

But don’t worry, linen and cotton are both thermal regulators. Thus, they are very airy and let your body brief through its fibers while giving you a feeling of coolness in summer. Coupled with its comfortable and stylish cut, the cotton or linen Jinbei is therefore very pleasant to wear on very hot days.

Some Jinbei also use Shijira and washi as mixing material. Especially in some high-end models. These are relatively premium fabrics that are very soft and breathable. Also, thanks to their exceptionally fine weave, these fabrics have the advantage of creating less friction on the skin.

Shijira is a Japanese fabric made since the Edo era in Takajima. It is characterized by very fine folds obtained by tightening the weft thread.

What to wear with a Jinbei? 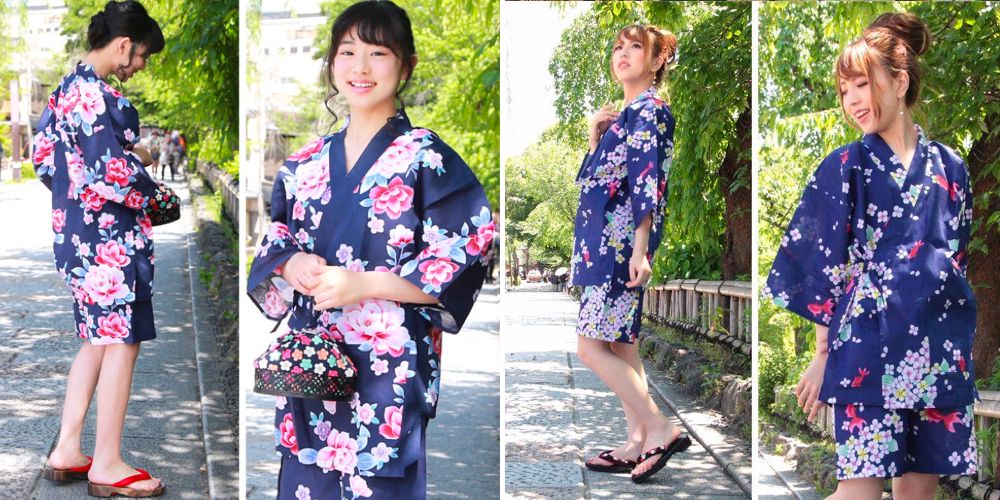 Some people also choose to wear their Jinbei with Waraji that are woven straw sandals usually worn by monks. Girls can complete their outfit with a kinchaku, a small bag made of wicker and fabric and even accessorize their Jinbei with a cute Japanese hand fan and pins in their hair.

How to clean a Jinbei?

To ensure that your Jinbei will last a long time, we have some useful cleaning advices for you!

First, we highly recommend to not put your Jinbei into the washing machine at a temperature higher than 40°C (104°F). If available, choose a program for cotton or delicate fabrics to not deteriorate the fiber.

Secondly, be sure to not mix colors when washing your Jinbei with other clothes. Furthermore, it is not recommended to use bleach or other dry clean products as they could as well deteriorate the quality of your garment.

After cleaning, we recommend to simply hang your Jinbei and to let it dry slowly as any other fragile garment. Do not put it in the drier. If you want to iron your Jinbei, be sure not doing it above 150°C (302°F).

Finally, even if it isn’t a luxurious garment as the Kimono or the Hakama, we highly recommend that you keep your Jinbei in a dry closet to prevent moisture. Be sure to also fold it correctly to keep the fiber stretched.