Samue (作務衣) are comfortable jacket and pants sets that were created by Japanese Zen monks to be worn during the Samu, which is all the physical activities to maintain the monastery. Nowadays, Samue have become the typical working uniform for men and women that work at workshops, temples, hotels and stores and can also be used for homework.

But of course, like all traditional Japanese clothes, the Samue has its history and its rules. So let’s discover together today everything you need to know about the Samue. #intro

What does Samue mean? 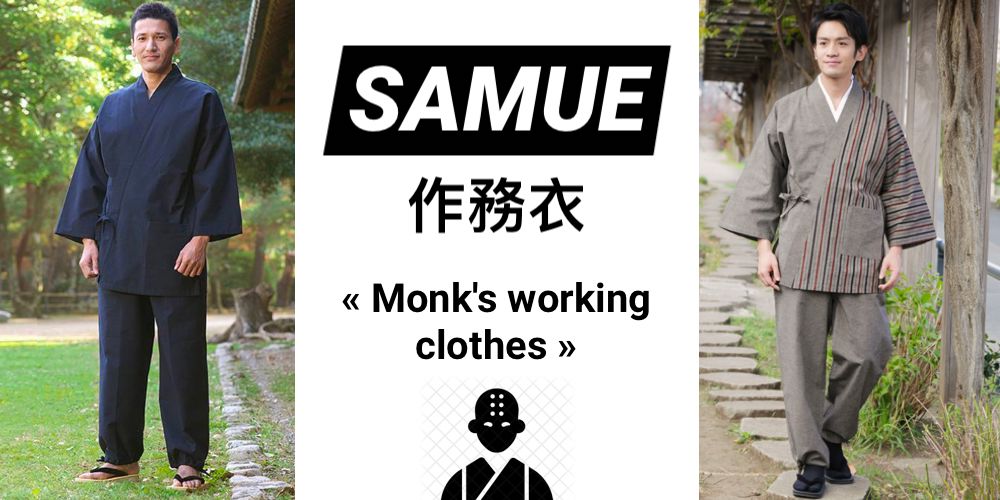 Samue, written 作務衣 in Japanese, means literally “monk’s working clothes” as this outfit was created at first by Japanese Zen monks to be used for labor work at the monastery.

The word Samue derives directly from Samu (作務), which is the Japanese Term used to describe all activities that Japanese Zen monks perform around the temple such as chopping wood or sweeping. 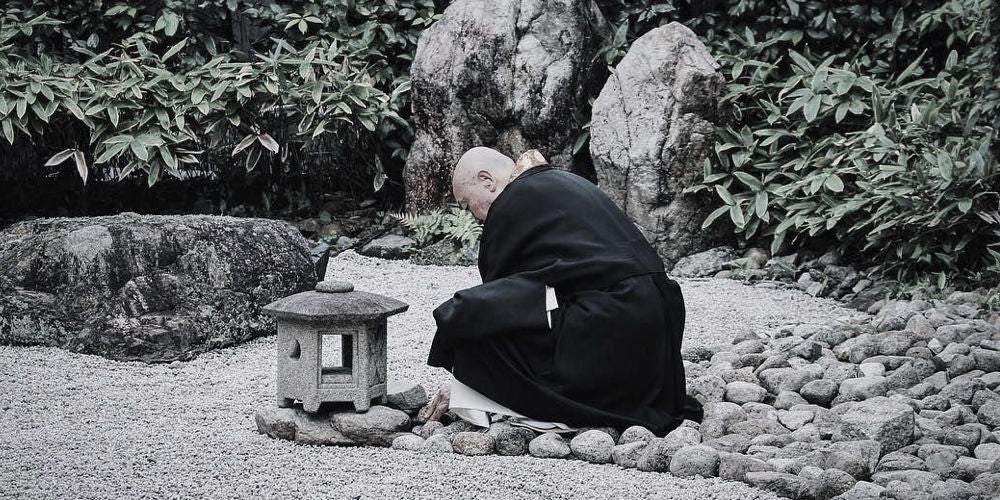 All their life, Japanese Zen Monks have to perform all sorts of labor work all around their temple. These different activities called Samu are entirely part of monks’ training to learn discipline and the value of things.

Samu (作務) is a very important process in a Japanese Zen monk life. Indeed, Monks need to maintain the Zen Monastery by theirselves everyday by keeping it clean and repair damages, but also farm the earth which helps to limit the expenses of the establishment which functions mainly with donations.

Samu is also a set of rules for monastic discipline and is still used today in many Zen monasteries as it helps maintain order among the residents and prevent preferential treatment.

The creation of the Samue

If you have already worn a Kimono, you know how it can be difficult to move freely while wearing one. Same issue applied to Zen monks at the time as they needed to perform the Samu while wearing their traditional clothes, which weren’t adapted for this kind of work.

For this very reason, Monasteries decided to design Samue to be convenient and easy to wear, with no wide sleeves that get in the way, and ropes to keep everything in place.

In the beginning, the samue was only the upper part, but it was longer than today, and looked like a tunic reaching down to the knees. The pants came a little later over the centuries. 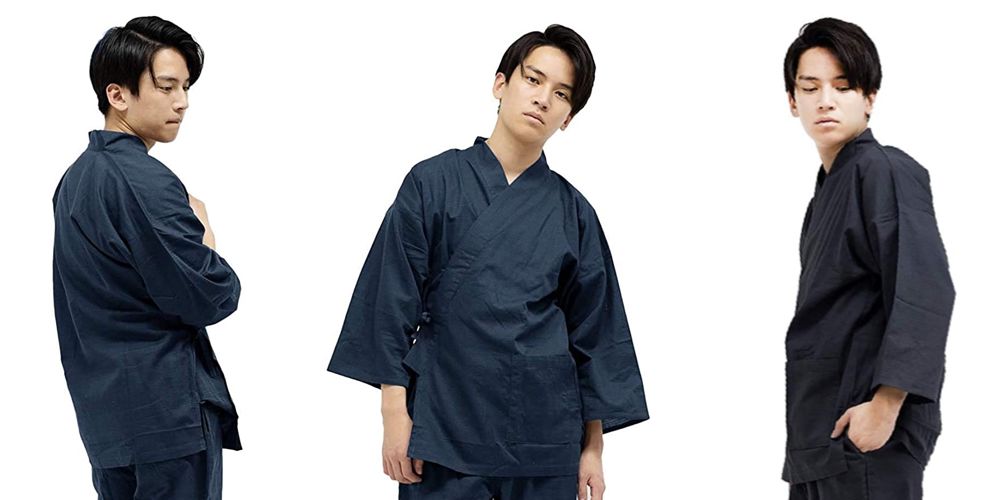 Like many other traditional Japanese garments, the Samue is inspired by the Kimono and is very similar to the Jinbei, which is the favorite summer outfit of Japanese people for inside and outside. 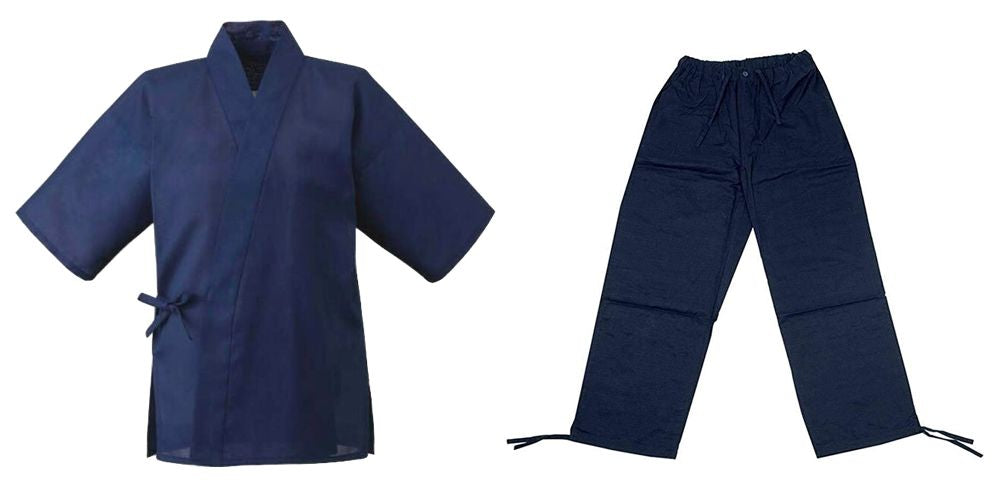 The samue jacket is about thigh length, crossing over the chest like a yukata, and tied with a simple tie. Samue pants reach the calves or ankles and have a drawstring closure at the waist, which is often elasticized nowadays.

Knowing that the purpose of Samue are to be comfortable, they are usually made of cotton or linen. The more simple the better, they usually made of a single solid color from top to bottom.

Samue can also be any color imaginable! One popular color is Japanese blue: the iconic natural indigo dye. Worn to work, samue tends to be in this navy hue, or other dark colors such as brown or black.

Most of Samue sold are unisex and can be worn by both men and women. You will recognize them immediately as the classic Samue is either indigo, black or brown.

However, modern Samue offer a wide diversity of colors. Some may think that colorful Samue are made for women, but in only reflects the fact that samue are no longer just workwear, but can also be used as leisurewear.

Differences between Samue and Jinbei 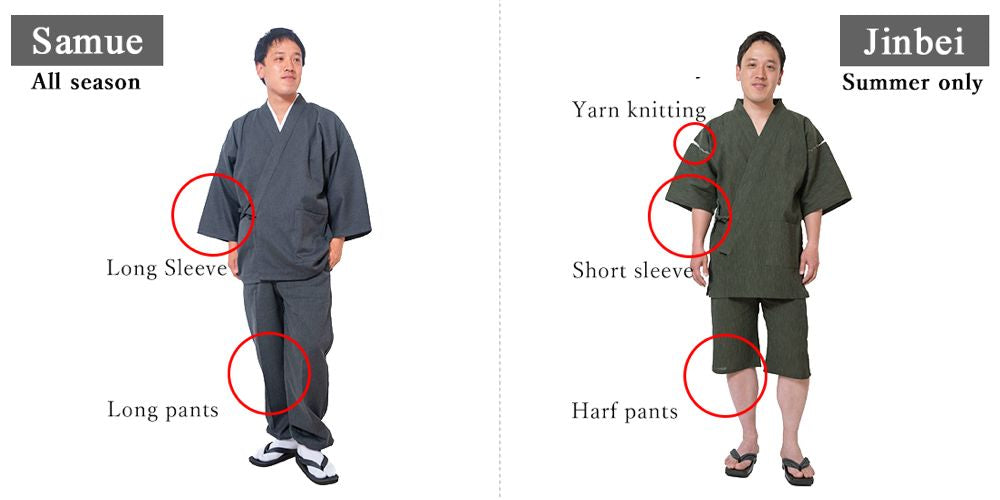 Although there is a very strong resemblance between the Jinbei and the Samue, they are not worn for the same reason and therefore have very distinct differences.

The biggest difference between Jinbei and Samue is why and when they are worn.

Indeed, Jinbei is a summer traditional Japanese garment that is very popular with Japanese men and women and worn as a non-formal comfort garment for inside and outside.

Samue can be worn all year round and are used as work wear, not comfort wear.

The Jinbei, a summer garment, is composed of a short-sleeved jacket and shorts that come down to just before the knees. In addition, Jinbei often have transparent knitted pieces of yarn on the shoulder to let the air through.

The Samue, which can be worn all year round, is made of a long-sleeved jacket and long pants to protect the arms and legs.

Although these two garments can both made of cotton, the Samue is often combined with hemp so that it can still be worn in cooler weather.

How to wear a Samue? 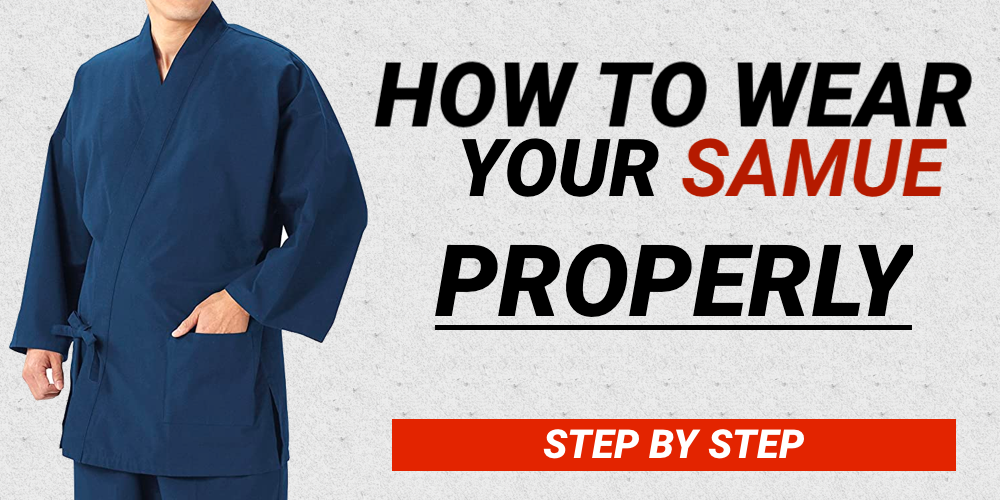 The Samue is the easiest garment in the world to put on! They are loose fitting, so you just put on the pants and tie them at the waist, then close the jacket with a knot on the side.

To wear a Samue, here are the 3 steps:

The only thing to remember when tying the jacket, as with all traditional Japanese clothing, is to bring the left side over the right side, so that the jacket is tied on the right side. The sleeves and legs of the pants are sometimes equipped with a drawstring to adjust the tightness. Most often, the pants or jacket have pockets, or both.

Just as Kimono and Yukata, Samue shouldn’t never be tied up from left to right.

Some people also wear a samue undergarment, usually white and in the shape of the samue, which comes off slightly around the neck. Some underwear has a dyed collar to match the samue, so it is mostly invisible underneath, but the simplest is a simple T-shirt, with or without a V-neck depending on what you like!

In the summer, a lightweight sweat-absorbing undergarment is a good idea to keep your samue clean, and in the winter, a thicker undergarment will keep you warm.

As samue was originally designed as traditional Japanese workwear, it has been adopted for practical use in many fields, especially by craftsmen and artists. It is not uncommon to see Japanese people wearing samue in workshops, studios or even offices.

Of course, Zen Buddhist monks always wear samue. If you stay in a temple and practice zazen, you will find that samue is favored for the practice of zazen mediation. Other practices with deep ties to Zen Buddhism have also incorporated samue. It is therefore often worn during tea ceremonies, or by calligraphers, and traditional musicians like shakuhachi players. In the same vein, samue is an excellent choice for activities like yoga.

If you are staying in a traditional Japanese hotel, you may be offered to wear a samue instead of or in addition to a yukata robe. They are elegant enough to be worn throughout the hotel, and comfortable enough to be worn in your room as pajamas. That’s why many people wear samue at home, whether they are entertaining guests or going to bed. Ultimately, anyone who wants to can and should wear samue today.

In summary, you can wear a Samue:

❌ When not to wear a Samue?

As explained above, the Samue is a non-formal traditional Japanese outfit used for labor work. Therefore, the Samue shouldn’t be worn during special ceremonies, important events or at a Japanese club.

What to wear with a Samue?

Designed to stand on its own, the Samue can be worn by itself without any other overgarment. However, if it is cold outside, a good warm coat may be necessary. You could try a Japanese jacket, which goes well with the samue.

As footwear, you can wear what you prefer as the goal is to be comfortable. However, if you want to complete your Japanese outfit, we recommend a pair of sandals.