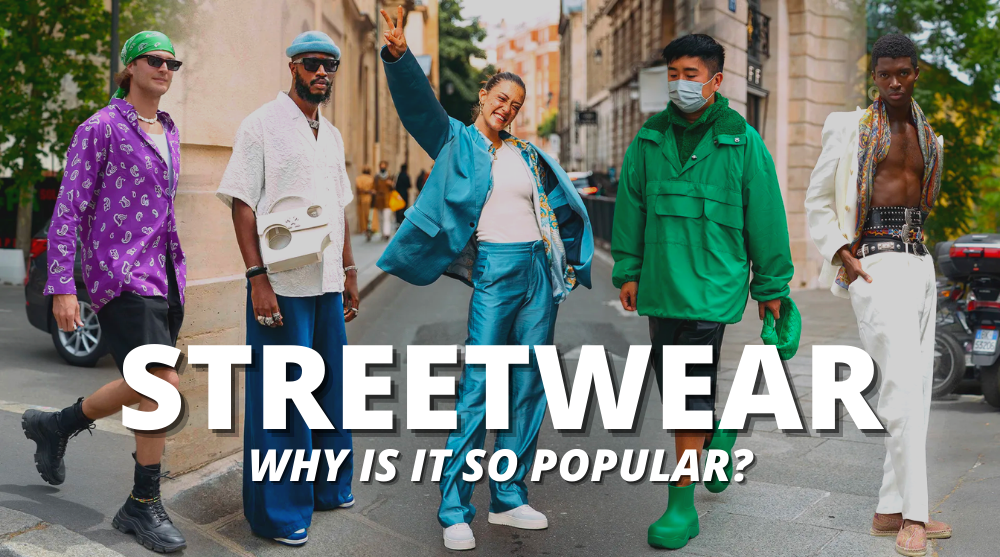 As you may have noticed, streetwear has had fairly unprecedented popularity in recent years. From rappers to skateboarders to luxury stores, why has streetwear become so popular?

Here at Japanese Clothing, we are undisputed streetwear enthusiasts. We’re passionate about these kinds of questions, so we’ve prepared an article for you to learn more about streetwear. Get comfortable, we’ll spend a few minutes together talking between enthusiasts. Let’s start!

Rappers have never been so involved in the streetwear world. We have for example Tyler, the Creator with the Supreme brand. He has worn the popular skate brand in approximately 10 of his clips, which have between 10 and 100 million views.

In his videos, we can find personalities close to the world of Supreme such as Jason Dill, the former skateboarder who is also a model for Supreme. Tyler, The Creator’s influence has had a more than decisive impact on the Supreme streetwear brand, which was trying to grow at a time when high-end streetwear was beginning to gain ground.

We can’t talk about influential rappers without mentioning ASAP Rocky, who from the beginning of his career has made an impressive number of clothing brands known. To date, he is the rapper who has made the most brands known.

Among these streetwear brands are Comme des Fuckdown, Pigalle, Black Scale, and Palace Skateboard. Not to mention the fact that he revived Air Force One fashion at a time when no one else was wearing it.

As rappers are becoming more and more influential in streetwear fashion, they are also becoming part of the creative process. It’s more common than ever to see rappers in the role of creative director. What does it involve? Well, in addition to wearing the brand’s clothing and publicly displaying its affiliation, the rapper also gives ideas and creates clothing for the brand.

Rappers have a much sharper visual universe than ever before, and streetwear brands are exploiting them more than ever. Which helps them maintain or increase their popularity. But public figures aren’t the only ones who have made the streetwear look so popular.

2. The influence of Community & Social Medias

Forums and blogs were the first platforms to develop the notoriety of streetwear brands and to build up a real culture. The biggest street culture blogs and forums appeared in the early 2000s; Hypebeast, created in 2005, was a blog and forum around sneakers, and highsnobiety, created the same year, had a similar impact, but in Europe.

For more than 10 years, these blogs, which have become media, have documented street culture, and have largely contributed to making it something giant. Of course, there were other sites.

To find out more about streetwear, there were paper magazines, which worked very well at the time. In addition, there were streetwear forums that allowed people to form a real community. Among the forums, there was the very popular NikeTalk, still active today, BapeTalk, Strictly Supreme, in short, blogs around specific brands.

There were also some forums around areas of interest such as Female Sneaker Fiend, a sneaker forum for women. We owe the forums all the jargon around street culture. For example, it was on the NikeTalk forum that the term HypeBeast first came out.

The forums have been a great way to connect people from all over the world, create friendships, business, and so on. Today, this has evolved a lot, there are several types of platforms to talk about this fashion, including this blog on which you are reading this article! 😎

3. Streetwear is a versatile style

Streetwear is the fashion most sensitive to new trends. It is in constant evolution. For example, today you can find normcore, dadcore, or rockstar adepts. These trends can be created and popularized by a brand, a celebrity, or by people themselves because they consume differently. In the latter case, we can mention the famous fuckboys, for example. This trend consists of stacking up different brands of streetwear that are a little expensive and rare.

Streetwear is the cool fashion that appeals to young people, and its particularity is the logos. That’s why brands like Coca-Cola or Pepsi collaborate with streetwear brands: because they think and know that there are great things to do in terms of influence.

4. Lots of collaborations between popular brands and Streetwear

The spirit of collaboration is part of the essence of streetwear. Some brands have regained popularity in large part due to collaborations. These include Kappa, which has launched a series of capsule collections with Marcelo Burlon, Gosha Rubchinskiy, and Opening Ceremony in 2017.

Why would you do that? To be present in people’s minds, and to redefine your brand image. Kappa now places itself in sportswear, but also in fashion, like Fila, but a little more upscale.

The urban brand Supreme also partially owes its success to collaborations with The North Face and Lacoste. This strategy has enabled them to broaden their customer base beyond skaters, by collaborating with other types of brands, or even with artists.

When quantities are very limited like the Yeezy Boost 750, or the Nike Dunk, the goal is not to make a lot of money but rather to increase popularity and brand image. By doing this type of partnership, it allows them to get publications in all the major media in the field without having to spend a single dollar.

Nowadays, collaborations are such a good vein that brands want to both gain notoriety and make money at the same time. In this spirit, we have the collaboration between Nike and Off-White, or Adidas with Kanye West.

5. Luxury brands have their own collection of Streetwear

First of all, let’s talk about Dapper Dan. He proved to everybody very early that streetwear and luxury could very well go hand in hand. To sum up, Dapper Dan is a self-taught designer from Harlem who took pieces from major brands such as Louis Vuitton or Gucci and readapted them into streetwear.

His main clients were Black celebrities from the world of hip-hop and sports. After receiving a lot of pressure from major retailers such as MCM, Louis Vuitton, and Gucci, Dapper Dan was forced to close his store. But a few years later, it was up to the luxury houses to copy what he had done.

For example, Louis Vuitton was inspired by his work for the brand’s 100th-anniversary campaign and featured Grand Master Flash on the poster. Gucci also copied one of his jackets. He who was seen as a second-rate creator finally became the vanguard.

There are also all the most popular artistic creators of the moment who all come from streetwear: Virgil Abloh, artistic director at Louis Vuitton, or Demna Gvasalia, the artistic creator from Balenciaga.

Streetwear is so popular that Gucci has created urban collections, with hoodies, t-shirts, and caps with the Gucci logo very dominant. The strategy was to put a lot of emphasis on the logo, which is typically what was done in vintage streetwear. Finally, the three most popular brands in the world are Gucci, Balenciaga, and Off-White respectively.

What is your opinion on Streetwear popularity?

Well done, now you know why streetwear is so popular. You have learned the history of this special urban style and what made it so famous. If you think your friends might be interested in the subject, don’t hesitate to share this article!

What about you? What do you think made streetwear so popular? Don’t hesitate to come and talk in the comments, between streetwear lovers, we understand each other. If you are looking for the best streetwear clothing with a Japanese influence, check out the best sellers of our streetwear collections: