Japanese fan art is a beautiful throwback at what old Japanese times were. Folding fan art is an important part of Japanese culture and, with its unique evolution and use of exquisite materials, there is much to learn about the path taken by this elegant and refined accessory.

Today, Japanese Clothing offers you this beautiful article to let you discover everything there is to know about Japanese Fan History with us. Ikimashou! #intro

The Japanese fan is a traditional Japanese accessory that was first used by the high-social classes of people in the past such as aristocrats or samurais, and was used to highlight the social status of its owner. The first Japanese hand fans date back to the 6th century A.D. since at that time the tombs of the deceased were decorated with fans.

At that time, the fan was nothing more than a large screen with a fixed handle, it could not even be folded. Then, from the 7th century, the Japanese developed the folding fan called Sensu (扇子) in Japanese that we know today. According to some urban legends, the first Sensu was created by a peasant after being inspired by the mechanism behind bat wings.

At that time, owning fans weren’t for everyone and only men and women of the court could afford to wear a one. Even so, to be sure that this rule was followed by all, a legislated fan use program was in place to restrict the use of the traditional accessory to certain social classes only. Folding fan first goal was to show the rank of its owner thanks to the number of wooden slats it was made of. Traditionally, cypress wood was used to produce this high-class Japanese folding fans.

Besides being a social accessory reserved for the most wealthy, Japanese fans were also an important accessory of Japanese traditional art. . From Noh to Kabuki, through Rakugo, they were used a lot in Japanese theater and it was unthinkable for artists to perform without one of them.

It was not until the Edo period that the use of Japanese fans was democratized and could be used by all social classes in Japan. And with the opening of country to other western lands, Japan began to export this accessory all around the world. 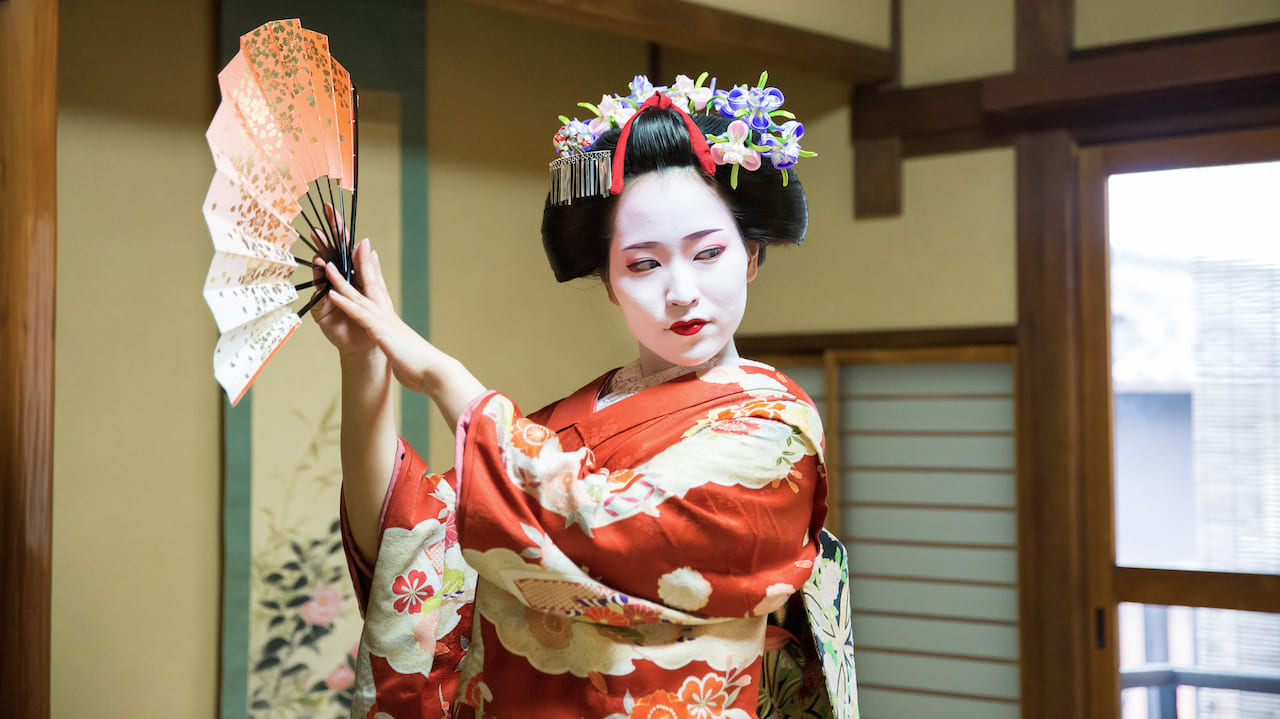 The use of Japanese fans as a performance accessory goes back many centuries. Already present in ancient times, it is only in the early 1700’s-1800’s that we can trace the beginnings of the use of these objects in dance or in theater.

They were then taken up by both male and female Geishas to the point where they became an essential part of their equipment. Geishas learned how to use Japanese fans from a young age in order to perform dances with grace and delicacy during their future shows and parties with clients.

Are Fans Japanese or Chinese?

Even if lots of people think fans come from Japan, the truth is that the world’s first fan was invented in China. Dating back to the 2nd century CE, this ancient fan was made of woven bamboo.

The Chinese fan has more than 3000 years of history and it has evolved a lot over the years. At the beginning of its history, the fan was not meant to be worn as it is today, but it was attached to the top of the carriages and used to block the heat of the sun and protect the passengers from the rain.

What do Japanese Fans represent? 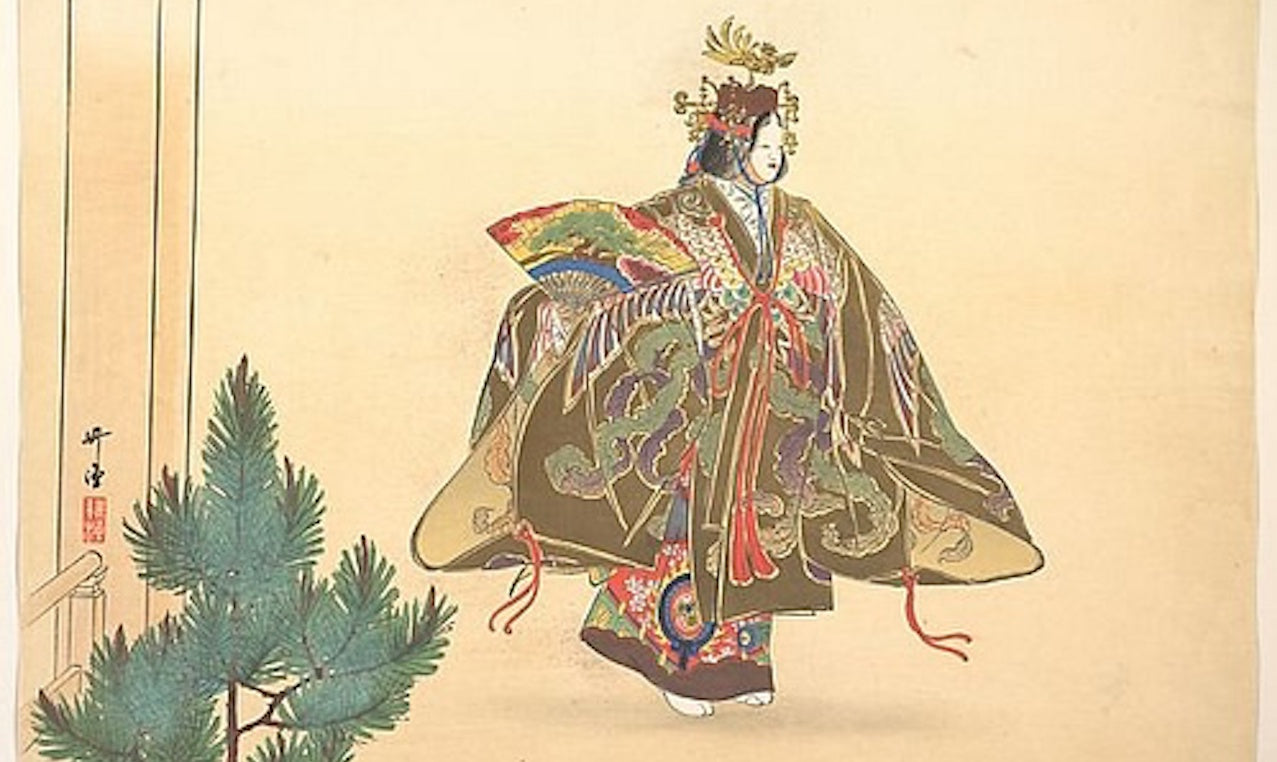 In Japan, fans were related to social status and represented wealth in the past during Feudal Japan. In 2021, they now represent art and communication as they have been an essential accessory for every Japanese person and today they remain very popular as cultural symbols or decoration all over the world.

In China, fans are true works of art. In fact, from the Song Dynasty onward, fan painting became an art form in its own right. Writers and artists in ancient China tended to adorn the objects they loved with their art and stories. It is not surprising, then, that fans became a canvas for many designers of the time. Fans decorated with paintings and calligraphy became known as “scholars’ fans” and often reflected a person’s status.

How to say “Fan” in Japanese?

Japanese word for “fan” or “Hand fan” is Uchiwa (団扇) but Japanese people also use the word Sensu (扇子) which describes specifically a folding fan.

All types of Japanese Fan

There are three main types of Japanese fans. Most domestic fans come in two forms: the Uchiha or the Sensu, and have various uses. The third type is the war fan.

The Uchiwa fan is classified as Japanese but is believed to be created in China, brought as gifts from the Chinese court to the Japanese court in the past.

Uchiwa Fans are flat, rigid and used as a hand fan or for decorative purposes. This type of fan has become the symbol of Japanese summer and can often be seen with its wooden or bamboo handle stuck to the belt at the back of a kimono.

Traditionally, it consists of a circular frame made from bamboo. Tissue paper, or washi, is then stretched over it and usually features beautiful and intricate painted or printed designs. Nowadays, uchiwa fans are often distributed for marketing or advertising purposes with slogans on each side instead of art. This is because they are the easiest fan shape to mass produce.

The Sensu or Ogi fan is widely considered to have been originated in Japan. Sensu fans are folding fans, and many varieties of sensu fans have developed on this basic structure. They measure 18 to 20 cm for women and 23 to 24 cm for men. Their design dates back to the Heian period (794 to 1185). The original fan was made of a folding bamboo frame covered with Japanese washi paper. It could be quite simple or with beautiful patterns.

The Hi-ougi fan is a member of the Sensu fan family. Otherwise known as a court fan, it is primarily a status symbol. It is made from strips of cypress wood connected by silk stitches. This fan developed from writing on wood strips due to the scarcity of paper; originally it looked more like a notebook than a fan.

Kawahori-sen is a similar fan, which developed from Hi-ougi, but is made with paper instead.

Another type of Sensu is the Chasen. It is a small folding fan used in tea ceremonies, where it remains closed. It is used as a sign of respect and is placed in front of its owner when making formal apologies, thanks or other important statements.

The Maiougi fan, another type of Sensu fan, is used in Japanese dance, with subtle differences in color and design for male or female dancers. 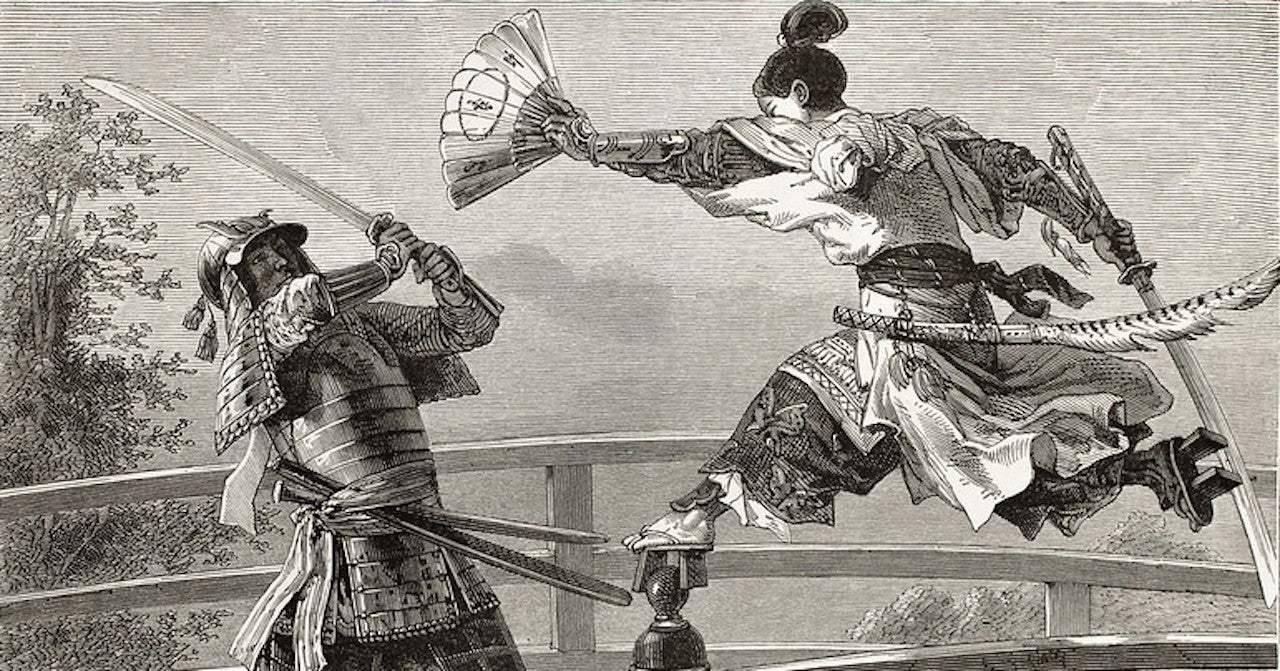 Fans were traditionally used in warfare in Japan. They were used both as a means of communication and as a weapon.

Gunbai or Gumpai fans were used by high ranking officers as a signal to the troops or to deflect arrows. These large open fans had a wooden core and were covered with metal.

Gunsen fans were used as a collapsible refreshment tool, but unlike other fans for airing out, their wooden frames and material coverings were often replaced with metals to make them light and durable. 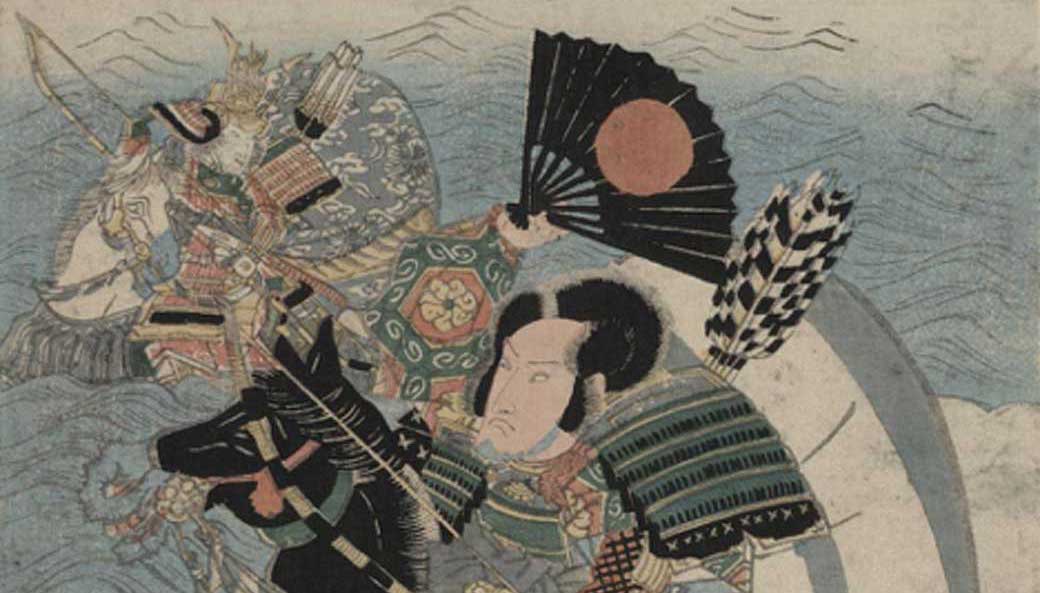 Tessen fans were also folding models, but they had heavy iron outer spokes, which made them a secret weapon. This meant that they could be taken to places where weapons were not allowed and could then be used as a defensive tool. A similar fan shape was also used by referees in sumo wrestling matches.

Today, folding fans are still as popular and desirable as they were thousands of years ago. They are often displayed as works of art in Japanese homes, businesses and traditional temples and also make unique and individual gifts for those interested in Japanese culture and design. With so many different materials and processes used to make fans, there are types of Japanese fans for everyone.

Where to buy Japanese Fans?

If you are looking for a beautiful gift to give or for yourself, our collection of traditional Japanese accessories offers you the best Japanese Fans with designs each more beautiful than the next. As a fashion accessory, as a home decoration or as an accessory for your shows, there is no bad reason to own one of them!